Getting Naked and Doing Dirty Things with Michael Biehn 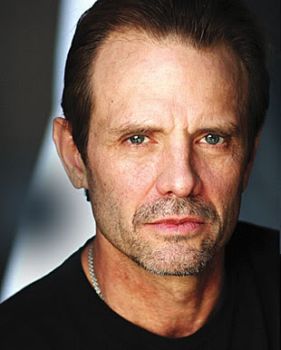 As I sat in the Alamo Drafthouse last week, waiting to chat with Michael Biehn, I couldn’t help wondering who exactly would show up.

In a career that has spanned more than three decades, Biehn has played every type of character imaginable. Would I be talking to the hardass Navy SEAL from The Abyss, or the concerned dad from Havoc, or perhaps the crazy cowboy from Tombstone?

Biehn was in town for SplatterFest, Houston’s premier horror film festival, where he was presenting his debut as a writer/director, The Victim, a hard-charging revenge thriller that instantly morphs any theater into a smoky, sticky-floored grindhouse.

So, I shouldn’t have been too surprised when the affable, low-key man who eventually sat down with me revealed himself to be neither a time-traveling freedom fighter nor a Special Forces soldier. No, the Michael Biehn I interviewed had assumed a brand-new role: filmmaker.

Accompanying Biehn was his wife, Jennifer Blanc-Biehn. Jennifer had a successful career spanning stage and screen even before partnering with her husband to produce and co-star in The Victim. And as she dashed around the theater before the screening, a blonde dervish checking on details and greeting guests, it was clear that she was still on the clock.

“Yeah, she really gets producing,” Biehn told me as Jennifer stepped away. “She’s still producing, you know, still dealing with all the details. She’s a really good producer.”

Suddenly, Jennifer appeared to prove his point. “We just closed our sale for our representation deal with a company called WTF, formerly called TF1 International,” she said excitedly. “We are their inaugural launching movie. They’re the people who found Hobo With a Shotgun, and we’re very proud to be part of it!” Then, she was gone.

“If it wasn’t for her,” Biehn said, “The Victim never would’ve gotten made. If it wasn’t for her, we wouldn’t have been in a lot of these different film festivals and screenings.” Besides SplatterFest and several other fests across the country, The Victim is screening tonight [October 7] at Spain’s prestigious Sitges Film Festival as part of the Midnight X-Treme category.

His first time out as a director and Biehn seems to have a hit on his hands. While this is an exciting time for the veteran action star, the behind-the-scenes drudgery is beginning to wear a little. 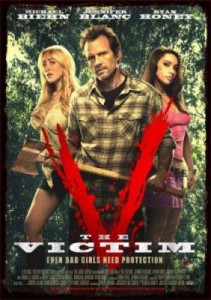 Jennifer popped by again, and I asked her about working with her husband. She laughed and said, “If you go to BlancBiehn Productions.com, you’ll get a look at a ‘making of’ and you’ll see a lot of screaming. And we’d be kissing on the set 10 minutes later. But in real life, we’re very passionate and volatile people. But in an odd crazy kind of way, it sort of works.”

In The Victim, Jennifer’s character, Annie, is forced into many and varied uncomfortable situations involving sex, nudity and violence. It’s what’s commonly referred to as a brave performance. Did she thank her husband for writing such a demanding role for her?

“Well, I always thank him for putting me in stuff,” Jennifer said, beaming at her partner. “But this is different because I brought him the project. I brought him the script that was written in the form of a novella [by Reed Lackey]. And he rewrote it. The verbiage is completely different; the only thing that’s the same is the characters. So, right from the get-go when I brought it to him, it was like, ‘I wanna play Annie.’ And her name wasn’t Annie at the time; it was Jennifer. And we changed it. My grandfather called my grandmother ‘Annie,’ so I wanted to pay tribute to her.”

Biehn broke in. “So, the script showed up two years ago, but I was working. And then about a year later, I saw a kid reading Rebel Without a Crew, [Robert Rodriguez’s book]. And I’d worked with Robert Rodriguez and I thought, ‘You know what, maybe I’ll try to make a little grindhouse movie.’ And I thought, ‘Well, I can maybe make that script that I remember.’ And I asked Jennifer to raise the money for me. And she raised a little bit, but not a whole lot.”

Of course, the amount of money raised determines the type of movie made. If there’s not a big budget to fall back on, a filmmaker will often depend on a lurid plot stocked with salacious elements to attract an audience. It’s a low-budget tradition that stretches back to the 1920s.

“I had to figure out what kind of movie I wanted to make,” Biehn confided. “You know, if it was going to be a kind of exploitive movie. I wanted to make a movie that made money so I could then go to another producer and say, ‘See, I made this movie and it made money, so give me a little more money this time.’” 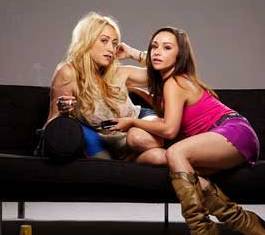 Biehn chuckled, warming to the story. “So I had to figure out what to exploit. I didn’t have enough money for, you know, zombies and bodies, and makeup even. So I asked Jennifer if she’d get naked for me and do dirty things on film. And she said yeah. Then we talked to Danielle Harris — everybody knows Danielle from Halloween and all of her movies — and we asked her if she’d get naked and do dirty things for us, and she said yes. So I said, okay, I got that covered.”

“Danielle’s a very dear friend,” Jennifer shared before taking off again. Biehn continued, “Basically, once I had the idea, I thought, okay, I got the girls; you know, I’ll add dirty cops; drugs is always good. I got the money to do a little bit of torture and a little bit of action, and I thought, ‘You know what, let’s just throw in a serial killer.’”

Everything was falling into place. All he needed was a final script. “I was supposed to be writing it,” Biehn explained. “The guy who actually had the money— I didn’t really think he had the money to make it. And so he started writing and cutting checks. And then the checks didn’t bounce!” 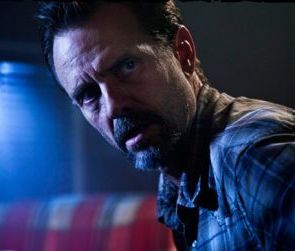 And so began an intense 12-day shoot. And no, that’s not a mistake — Biehn and crew actually shot all of The Victim in 12 days. “The thing about shooting it in 12 days that’s really great is, it’s great to know as a filmmaker, you know? But when people watch it, they never know that.”

Scratching his head, Biehn said, “We didn’t have time to think about what we shot that day. We were moving fast. We were doing 35 setups a day. We had one camera. And we shot 12-hour days too. There were no, like, 14-hour days. Not any of that stuff.”

Although he pushed everyone to their limit, Biehn is proud to have finished with all relationships intact. “Even though I was a raving lunatic — a maniac, screaming at everybody the entire time — nobody quit and nobody got fired.”

The result is a kickass exploitation flick full of striking images as well as cheap thrills — one that will no doubt achieve cult status, thanks in large part to a canny domestic distribution deal that will put The Victim into college campus theaters across the country next year.

Biehn is extremely proud of the movie that resulted from his first time behind the camera, but wait — didn’t he helm another film a while back?

Biehn smiled sheepishly. “Umm, I was supposed to do something over in China called The Blood Bond. I went over there and the producer really wanted to direct it himself, but he wanted to use my name to sell it as a first-time director. So he directed it, then he used my name. You know, all the voices in the movie are not mine — they looped it.”

But he’s fine with the way things turned out. It’s just one of those things that happens in showbiz. “In all fairness, I got paid. And I don’t think I embarrassed myself on camera, but I sure as heck didn’t direct it. I didn’t direct that at all actually. The Victim is my directorial debut.”

When Jennifer stepped over to pull him away for the screening, Biehn nodded and rose from his seat. “What I like to tell people about The Victim is, when I made it I wanted people to have fun. I wanted them to enjoy themselves. And I felt like if we were could take their minds off their problems for 85 minutes, I’d be happy. I kind of describe it as— it’s like real, true pulp fiction. Like a big bowl of ice cream that you look at and you go, ‘Ohhh, man!’ And then you’re eating it and eating it and eating it and eating it, and it’s really good while you’re eating it. And then afterwards you’re like, ‘Ahhh, Christ. Did I enjoy that as much as I thought?’”