Now Playing at the House of Grind — The Victim 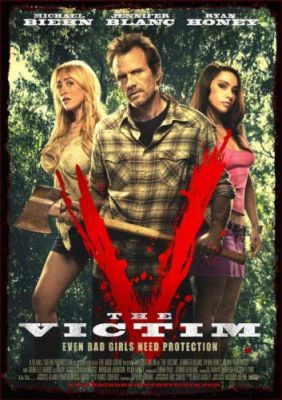 A gutsy throwback to the glory days of 42nd Street, The Victim is a flick that gleefully treads on dirty ground avoided by most modern filmmakers. The film stars Danielle Harris and Jennifer Blanc as Mary and Annie, two party girls who live in a small town plagued by the disappearances of several young women.

During a drug-fueled sexual encounter, Mary is killed by her sleazoid cop boyfriend, Harrison (Ryan Honey), and Annie is sent running for her life. Trying to escape Harrison’s buddy Cooger (Denny Kirkwood), in over his head, Annie discovers the cabin of a reclusive ex-con named Kyle, played by Biehn, who provides protection to the scared young woman. But when the situation turns brutal and it looks like Annie isn’t what she seems, who really needs protection?

I’m happy to say The Victim is a film that goes there. And you know where “there” is. “There” is where contemporary movie studios, run by accountants and fear, won’t let movies go anymore — a savage place where the visceral kick of violence and nudity is not only appreciated, but encouraged. Luckily, Biehn knows a film needs more than thrills and has delivered a movie that doesn’t depend solely on sordid deeds to succeed.

Though he’s been acting for decades, this is Biehn’s first true attempt at writing and directing. He based his script for The Victim on a story by Reed Lackey and the result is surprisingly nuanced for an exploitation flick. Using strategically placed flashbacks, Biehn has conceived a narrative structure that moves forward even as it looks back. Though it has a bit of trouble finding its rhythm, The Victim soon settles into a groove that moves along quickly, revealing just enough to intrigue and keeping the audience guessing, even as it ends. 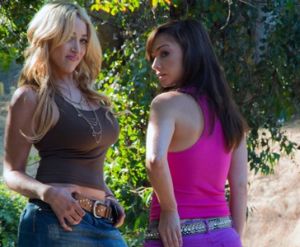 This is a movie that features a tight ensemble of actors. As Mary and Annie, Harris and Blanc are put through the emotional wringer, but they also get to play several small moments that feel like real friendship. Thankfully, Biehn and cast know these are the details that help ground an exploitation flick, and they make the most of them.

The Victim is a showcase for the obvious talents of Blanc, who also produced the flick. But Harris also shines in a role that’s smaller, though no less important. Her Mary is a little girl lost, clearly searching for something she’ll sadly never get a chance to find.

Biehn gives a performance that’s worlds apart from the action hero we usually see him portray. I know this observation sounds untenable, but his work in The Victim evoked a weird combination of Gary Cooper and Dennis Hopper. His Kyle is a decidedly strong, silent type…to a point. Then, the crowbar comes out and all bets are off.

This article was posted in Reviews and tagged Danielle Harris, Denny Kirkwood, exploitation, Jennifer Blanc, Michael Biehn, Now Playing at the House of Grind, Reed Lackey, Reviews, Ryan Honey, Slammed & Damned, SplatterFest, The Victim, Theron Neel, thriller. Bookmark the permalink. Follow comments with the RSS feed for this post.Trackbacks are closed, but you can Post a Comment.