You Wouldn’t Like Her When She’s Angry — Cherry Bomb 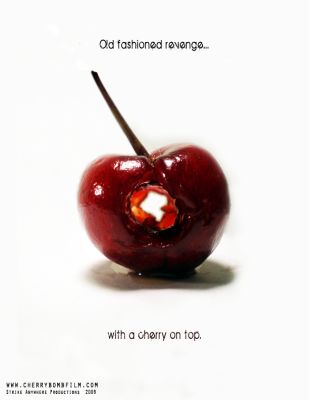 Texas has a storied film heritage. Over the years, the Lone Star State has given the world a wide range of cinematic talent, including directors as diverse as Tobe Hooper, Richard Linklater, Wes Anderson, Tex Avery, Terrence Malick and Robert Rodriguez.

Today, the state’s filmmaking legacy continues to thrive. The film communities in Austin, Dallas and Houston are full of committed industry professionals who — despite the seeming best efforts of certain political players — are flourishing, making movies of all shapes and sizes. I know this to be true because, having spent the past few days at SplatterFest, I’ve seen the evidence.

An homage to the low-budget movies of the 1980s, Cherry Bomb is a rape/revenge exploitation thriller that, sidestepping the genre’s more grisly aspects, never goes deep enough to be considered underground, yet manages to avoid feeling like a total sellout.

Most contemporary entries in this controversial film style fall into two camps: blandly toothless or needlessly offensive. Granted, it’s a fine line for a filmmaker to walk — too much nudity and sexual violence makes you a heartless, manipulative misogynist; too little renders you a neutered pretender. But with Cherry Bomb, Day has found a balance that works, for the most part, thanks largely to Garrett Hargrove’s screenplay and some unexpectedly deft performances.

Cherry Bomb follows the traditional rape/revenge structure but tweaks the usual conventions just enough to keep things interesting. Cherry Bomb (Julin Jean) is a small-town stripper, grinding it out at the Pussy Hut, which, considering the events that transpire within its walls, is an apt name for the cabaret owned by the unctuous Ian Benedict (Nick Manning). One night at the club, Cherry is brutally raped by five men. Of course, they are well-placed, untouchable members of the community…or so they thought. For when Cherry teams with her estranged brother, Brandon (John Gabriel Rodriquez), for a little well-deserved payback, it becomes clear that no one is safe. But as her powerful abusers start to fall, Cherry unexpectedly finds herself caught in a web of intrigue that could spell the end of everything she holds dear.

By demonstrating a solid command of technique, Kyle Day sidesteps the pitfalls many low-budget filmmakers fall into. There are, of course, the usual bloody setpieces, but Day also adds understated visual touches that give Cherry Bomb more style than the usual B movie. One scene in a nightclub where Cherry kills one of her attackers is especially slick, accented by striking use of music and strobe effects.

But for the type of flick it is and the world in which it is set, Cherry Bomb does at times seem a bit sanitized. It often feels like Day is going out of his way to tone down the usual salacious grindhouse aspects, while letting the film’s violence run free. There’s just enough nudity to satisfy distributors, but there are lots of gory kills, which brings to mind the classic “nudity is forbidden but violence is encouraged” observation. In a B movie where the main character is a stripper, it feels false to never see her actually strip (a common occurrence with actresses in A-list films, such as Jessica Alba in Sin City and Natalie Portman in Closer). That’s not to say that Cherry Bomb star Julin Jean can’t deliver though.

As Cherry, aside from the occasional awkward line reading, Jean is more than up to all her character requires of her. Whether strutting her stuff on the Pussy Hut stage, brandishing a high-powered rifle or finding novel uses for a nail gun, Jean always comes off as credible, which is a hurdle that’s hard to clear for even burly, macho actors. That the petite stunner Jean can sell it says a lot for her action-hero abilities. 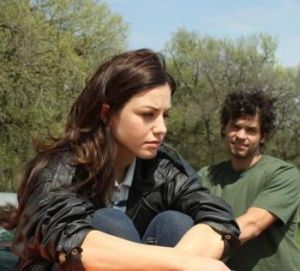 The rest of the cast is even better. As Brandon, Rodriquez is possibly the best actor of the bunch, always in the moment and evoking empathy as he goes against his beliefs to aid his sister. As Sapphire, Cherry’s best friend, Denise Williamson is a perfect foil for Jean. Both Williamson and Jean are members of an informal Texas regional low-budget repertory company and have acted together frequently, so it makes sense they work so well off each other. The biggest surprise here was adult film actor Nick Manning. In his first “real” movie, Manning pitches his performance slightly over the top, which is just far enough. It’s the exact type of acting you see in a straight-to-video ’80s movie.

Cherry Bomb has the occasional convenient plot devices — the stalled car that opportunely starts or the elaborate booby trap that’s rigged in a few minutes — and seems to putter out rather suddenly, but Hargrove’s script feels true to this particular genre and distinguishes itself with offbeat comic moments that would probably be cut from most contemporary action flicks before production starts.

As a director, Kyle Day isn’t quite ready to assume a spot on the low-budget Texas filmmaking firmament alongside Tobe Hooper or Robert Rodriguez, but with Cherry Bomb he’s taken an admirable first step. Hopefully, he won’t play it as safe next time out.