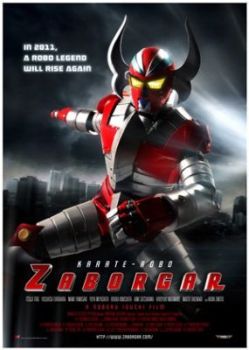 I was in Austin last weekend for my first Fantastic Fest. And while I wasn’t able to catch any of the films I actually wanted to see, that turned out to be a blessing in disguise because it allowed me to see some great movies I would’ve missed otherwise.

Based on Denjin Zaborger, the mid-1970s Japanese television series credited for inspiring the Transformers, Karate-Robo Zaborgar is the whacked-out story of secret policeman Yutaka Daimon (Yasuhisa Furuhara), martial arts expert and protector of all that is good. Daimon regularly has to deal with all kinds of weird and fantastical assaults on righteousness. It’s not uncommon for him to battle hovering cyborg heads and giant monsters.

When his father dies, Daimon inherits the mighty Zaborgar, an awesome transforming motorcycle robot that possesses kickass weaponry and super-sweet karate skills. They soon become bestest friends and, together, the two make an invincible crime-fighting team. It’s not long until they have uncovered a dastardly plot launched by the underground criminal organization known as Sigma to kidnap politicians and use their DNA to create a ginormous villainous robot, which you must admit is genius. Usually, this would be easy enough for Daimon and Zaborgar to handle, but things get complicated when the lovely and, yes, evil Miss Borg (Mami Yamasaki) enters the picture.

It seems a young man needs more than a transforming motorcycle robot can offer on those long, cold Japanese nights, and when Daimon encounters the beautiful Miss Borg during a particularly heated battle, love blooms. Miss Borg is half human, half machine, but all woman. Sadly, she is also in the employ of Dr. Akunomiya (Akira Emoto), the perverse and perverted head of Sigma. Though they have opposing philosophies when it comes to the nature of good and evil, there’s no denying that Miss Borg and Daimon are perfect for each other. But theirs is a union that Zaborgar cannot bless, which spells the end of Daimon and Zaborgar’s relationship. 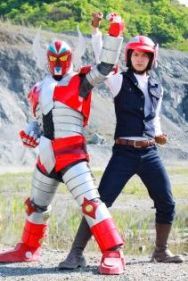 Now, if Karate-Robo Zaborgar stopped there, it would still be an amazing flick. But it keeps going, jumping ahead 25 years, where we find that the older Daimon (Itsuji Itao) is living in disgrace, a forgotten hero, and working as a driver for the crooked Prime Minister. When he learns Sigma and Dr. Akunomiya have at long last completed their evil, ginormous, politician’s DNA-infused evil robot, Daimon must dust off his karate chops and suit up one last time. But can his old partner Zaborgar put the past in the past and join Daimon to defeat Sigma once and for all? Hell yeah he can!

Filled with imagery familiar to anyone with fond childhood memories of old Godzilla flicks, Karate-Robo Zaborgar comes to us from the fevered mind of Noboru Iguchi. As the man who gave us The Machine Girl and RoboGeisha, Iguchi doesn’t seem like the ideal director to reboot such nostalgic, family-friendly material. But he turns out to have been an inspired choice.

Iguchi’s past films were gore-filled transgressive thrill rides, but he tempers his gonzo side just enough to make Karate-Robo Zaborgar gleeful delinquent fun that, uncharacteristically, doesn’t come close to offending. Next to a couple of scatological gags, the most iniquitous things you’ll find here are gigantic schoolgirl robots with writhing, gaping-mawed boob and butt dragons…which, now that I see it written down, looks pretty bad. But, trust me, compared to the atrocities that fill The Machine Girl, it’s pretty tame stuff. 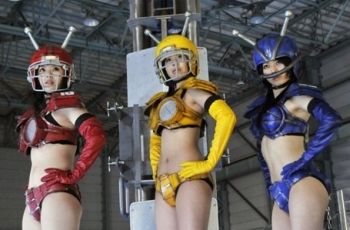 Be warned, Karate-Robo Zaborgar looks rather shabby. But this is the type of film where actually seeing the budget onscreen would lessen your enjoyment. Though Iguchi had more money to spend on this flick than on any of his previous movies, he wisely makes sure it never gets in the way of the retro feel. He’s helped in this regard by a wonderfully period-specific score filled with cheesy electronic beeps and whirs that make the viewing experience either more rewarding or more irritating, depending on your specific tastes.

But if you’re still with me, you already know whether this flick is your cup of tea. If you smile when you hear the names Ultraman and The Space Giants, or if you dig kung fu cyclebots, or if you just enjoy eyeing gigantic schoolgirl robots with writhing, gaping-mawed boob and butt dragons, Karate-Robo Zaborgar is your type of film.