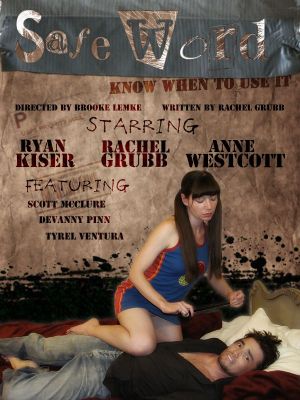 Indie film darlings Rachel Grubb and Brooke Lemke have a twisted new project planned, but this time they’re taking it to the Internet.

Lemke and Grubb are producing a 12-episode webseries called Safe Word. Lemke will be directing this “dark and revealing taboo-laden story about a man with a secret, and the lengths he will go to come to terms with it.” [Editor’s note: This is just conjecture, but I’m willing to bet the secret has something to do with sex…at least, it better.] Written by Grubb, the project began life as a feature but morphed into a webseries along the way.

The ladies have a locked a pretty solid cast for Safe Word, including Grubb (Why Am I in a Box?), Ryan Kiser (the upcoming Potpourri), Anne Westcott (Third Party ‘08), Devanny Pinn (Piranha) and Scott McClure (The Joker Blogs).

The series will be produced under the aegis of Silent-But-Deadly Productions, Grubb and Lemke’s Minneapolis-based production company. I know that Grubb made the move to Los Angeles a while back, and the ladies tell me that Safe Word will be their company’s first official L.A. production.

Safe Word has already started shooting but, like any self-respecting indie filmmakers, Lemke and Grubb are seeking finishing funds through the IndieGoGo website. For just a few bucks, you can claim cool perks with salacious names ranging from the $10 “Just Some Light Spanking” to the $100 “Mistress, Can I Have Another?” If you’re really feeling it, $500 allows you to scream “Let Me Have It!” during a dinner date with the cast member of your choice.

Grubb and Lemke are two of the more gifted indie filmmakers of any gender. They are not only talented, but they are also altruistic and passionate about film. Silent-But-Deadly Productions is a female-centric company dedicated to providing chances for women in film to expand their abilities while working in a nurturing and positive environment. And if that’s not worth a few bucks, I don’t know what is.

This article was posted in Updates & Teasers! and tagged Anne Westcott, Brooke Lemke, Devanny Pinn, horror, Piranha, Rachel Grubb, Ryan Kiser, Safe Word, Scott McClure, Silent-But-Deadly Productions, Slammed & Damned, Theron Neel, thriller, Updates & Teasers, Why Am I in a Box. Bookmark the permalink. Follow comments with the RSS feed for this post.Trackbacks are closed, but you can Post a Comment.