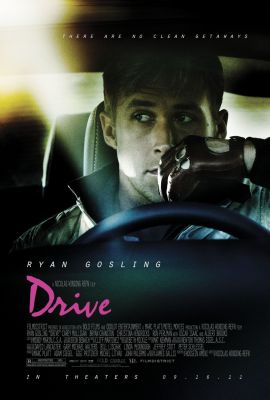 Drive, the new film from director Nicolas Winding Refn, is a stunning example of genre blending that’s as brutal as it is beautiful. Moments of beatific solitude sit beside flashes of brutish violence in an oddly natural way. But this makes sense considering the whole movie is a study in contrast.

Based on the novel by author James Sallis, Drive is 1950s L.A. noir blended with one those wonderful ‘70s muscle car flicks, like Bullitt or Two-Lane Blacktop. Refn then adds a dream-like sheen and adorns the film with ‘80s sounds, European colors and contemporary arthouse flourishes. The result is one of the most cinematically interesting crime dramas to pull into theaters in a while.

Ryan Gosling is Driver. Driver drives — that’s what he does, and that’s who he is. He doesn’t say much, but his performance behind the wheel speaks volumes. Whether he’s acting as wheelman for a petty crime or flipping cars as a stuntman for Shannon (Bryan Cranston), Driver isn’t alive unless he’s moving. He doesn’t realize how empty this existence is until he meets Irene, played with a heartfelt ingenuousness by Carey Mulligan, and her young son. Soon, Driver becomes their friend and fills the void left by Irene’s husband, Standard (Oscar Isaac), who’s doing time. Things get complicated when Standard returns home with some rather unpleasant baggage in tow.

The flick is anchored by a very controlled, quiet Ryan Gosling. Driver is very much an archetypal character. Driver is a simple man, a man who wants nothing but what he earns and what’s right, and Gosling nails it with a still, measured performance. Driver is a nod to The Driver, Walter Hill’s 1978 film, which itself is a nod to Jean-Pierre Melville’s Le Samouraï. But Driver is also Steve McQueen and James Dean. Gosling is well aware of these touchstones and his work here is inspired by them, and just inspired.

I first became aware of Gosling back when he was Young Hercules, but I didn’t really take notice until The Believer a couple of years later. He’s been fantastic in several small films throughout his career, but he’s still best known as the star of The Notebook. And that’s fine. Gosling hasn’t let the popularity gained from that one role stop him from doing interesting work. 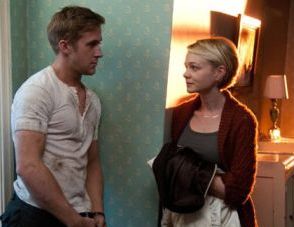 Drive is filled with superb performances though. In addition to Carey Mulligan and Bryan Cranston, there’s fine work from Oscar Isaac and Ron Perlman, whose turn as a loud, gaudy mobster is pitched just right. Christina Hendricks does what she can with a small role as a double-crossing moll, but it’s Albert Brooks, as a quietly menacing low-level crime lord, who steals the show.

The flick opens with a tense pre-title sequence that both electrifies and informs. As a director, where Refn excels is the details. A cutaway shot, a perfectly composed frame, subtle use of reflection and color, the patience to let a scene run just long enough — all these small touches add up to a masterful film.

By taking the best stylistic elements from decades past and combining them, and employing one of the better acting ensembles in recent memory, Refn has delivered a movie that spins a slightly weary style in a new direction to great effect. Drive might not be entirely original, but it’s totally unique. And that, in itself, is quite an accomplishment.