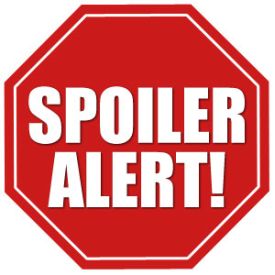 Over the years, I’ve been informed in language both courteous and, umm, colorful that nothing is more infuriating to a particular breed of movie fan than the dreaded spoiler.

On a related note, nothing is more infuriating to all movie writers than that particular breed of movie fan. Tell me, movie fan, exactly what and how much are we writers allowed to disclose? And how long does a film/television series episode/novel need to exist in the world before it’s safe to discuss plot points without incurring your wrath? I usually err on the side of caution and reveal just enough to make readers remark, “That’s your whole synopsis?” To which I reply, “Don’t blame me; blame a particular breed of movie fan.”

In any case, it turns out that this particular breed of movie fan has been wrong all along. Spoilers aren’t bad. Indeed, it’s been scientifically proven that (SPOILER ALERT) spoilers actually increase one’s enjoyment.

According to a recent study by University of California, San Diego’s Nicholas Christenfeld and Jonathan Leavitt, people prefer spoilers, even when the spoilers reveal a crucial plot twist or the surprise ending of a mystery.

Christenfeld and Leavitt conducted an experiment involving dozens of subjects who read 12 short stories by renowned authors such as Anton Chekhov, Agatha Christie and Raymond Carver. These stories were divided into three separate styles (ironic twist stories, mysteries and literary stories). Some subjects read the stories without any spoilers; some read them with a spoiler written into the actual text of the story; and some read stories with a preface containing a spoiler.

When all the data had been gathered and crunched, it was revealed that in all but one instance, test subjects preferred the spoiled stories. The results are illustrated in the following chart.

I’ve long believed the maxim “It’s not what a movie is about, it’s how it’s about it.” This study seems to prove that. While a story’s plot is important, the way a story is told is even more important. UCSD psychology professor Christenfeld agrees, saying, “Plots are just excuses for great writing. What the plot is is (almost) irrelevant. The pleasure is in the writing . . . You can better admire the way the plot is constructed if you know where it’s going.”

Personally, I’ve always liked spoilers. I want to know what’s going to happen. And already knowing doesn’t keep me from enjoying a story. For me, it’s the journey, not the destination. I think this is outlook that allows us to reread a favorite book or watch a beloved movie repeatedly. And this study seems to indicate I’m not alone in my belief. 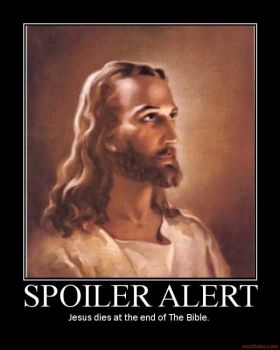 “It is possible that spoilers enhance enjoyment by actually increasing tension,” Christenfeld and Leavitt wrote. “Knowing the ending of Oedipus may heighten the pleasurable tension of the disparity in knowledge between the omniscient reader and the character marching to his doom. This notion is consistent with the assertion that stories can be reread with no diminution of suspense.”

This applies to film as well as literature. “If you watch [The Usual Suspects] knowing [the twist ending], you get to enjoy all the clues the director put in there,” said Christenfeld. “And I suspect that’s a movie when [viewers] watch it, they go back and watch it again, because now they can appreciate what the movie is doing.”

Another benefit of spoilers is they make you feel smart, or more specifically, not dumb. It’s no fun to watch a thriller and guess the wrong killer. Sure, we cover up by thinking, “Ahhh, nice twist!” But deep down, we know we should’ve seen it coming. I mean, sheesh, how can we call ourself a movie writer if we can’t see that…ahem, excuse me. As Jonah Lehrer eloquently wrote in Wired, “The human mind is a prediction machine, which means that it registers most surprises as a cognitive failure, a mental mistake.”

So the next time that particular breed of movie fan gets upset because you, say, reveal that Kevin Spacey is Keyser Söze, tell them you are just trying to keep their prediction machine from registering a cognitive failure. That should shut them up — for a minute, anyway.

This article was posted in Other Awesome Stuff and tagged Film. Literature, Jonathan Leavitt, Kevin Spacey, Nicholas Christenfeld, Other Awesome Stuff, Slammed & Damned, Spoilers, The Usual Suspects, Theron Neel, University of California San Diego. Bookmark the permalink. Follow comments with the RSS feed for this post.Trackbacks are closed, but you can Post a Comment.