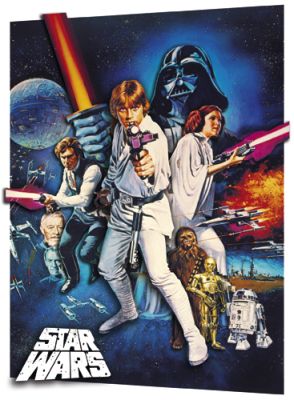 The announcement of another new DVD release of the Star Wars saga can mean only one thing. That’s right, there’s another whole new batch of pointless George Lucas alterations for fans to howl about.

On September 16, Blu-ray editions of all six live-action Star Wars flicks will be released (though after all the revisionist CGI tomfoolery Lucas has engaged in over the years, it hardly seems right to call them “live action” anymore). And, yes, Lucas has screwed with the films again.

Lucas has said that he thinks of a film’s initial release as a working draft, and each time he rereleases it, he might as well take advantage of whatever new technology has emerged to fix some mistakes and make it better. After all, it’s what Lucas would’ve done originally had he been able. And, hey, maybe he’s right.

These are his movies. He made them. If Lucas wants to modernize the visual effects or upgrade the sound, why not. I believe most casual fans would agree with that. But I think the true issue here is Lucas’ willingness to alter the plot and internal mythology, and therefore the effectiveness, of his master work to agree with changes in his personal value system or, maybe worse, to make his product more marketable.

Let’s use Lucas’ most infamous change as an example. In the original 1977 theatrical version of Star Wars — or, as it’s called now, Star Wars Episode IV: A New Hope — when bounty hunter Greedo tries to capture Han Solo in the cantina, Han shoots the bounty hunter, killing him in cold blood. Greedo never even gets off a shot. When the movie was released on DVD in 1997, Lucas altered the scene allowing Greedo to shoot first and miss, and Han to shoot back in self-defense, thereby inspiring the “Han Shot First” mantra and countless Kevin Smith tirades. To add insult to injury, Lucas altered the scene again in the 2004 rerelease in an apparent effort to quell naysayers. This time, Han and Greedo shoot almost simultaneously, but Greedo still shoots first. 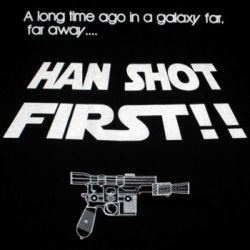 Lucas rationalized this change by saying he did it For The Children. He wanted kids to see that Han had no choice; he had to defend himself against the evil Greedo. Now, I’m not a huge Star Wars geek — really, I’m not — but there are a couple of problems with this.

First, Greedo was sitting about a foot away from Han. How could he miss? Whatever, it was a bar fight; it could happen. Letting that go, we come to the major problem: This one simple alteration completely changes the character of Han Solo.

In a film, every character action telegraphs something. And Han shooting Greedo illustrated Han’s moral ambiguity. Han Solo begins as an anti-hero. Yes, he’s a charming rake, but he’s only out for himself. By turning him into a somewhat nicer guy, Lucas made Han’s hero’s journey less effective. What’s frustrating is that, as a disciple of Joseph Campbell, Lucas knows this. Okay, I’m beginning to scare myself, but you get the point. Let’s move on to the new DVD edition.

The new changes Lucas has made for the forthcoming Blu-ray release range from minor quibbles to a major modification that, again, alters the personality of one of the main characters.

In Episodes II and III, Lucas began using portraying Yoda through CGI. Now, in the Blu-ray edition of Episode I, Lucas has gone in and changed every instance of puppet Yoda to CGI Yoda. Because why not. Also, in Return of the Jedi, the Ewoks now have eyes that blink. Personally, I’d never noticed that Ewoks didn’t blink, but hey, if it makes Lucas feels better, sure. These are minor tweaks. But there’s one particular change that is sure to inspire some fanboy and -girl complaints.

In what is bound to be the most controversial “improvement,” in the climax of Return of the Jedi, [SPOILER ALERT] Darth Vader screams “Nooo!” a few times as he kills the Emperor for torturing Luke, who we now know to be Vader’s son. This simple change morphs Vader from an evil automaton — one whose silent murder of the Emperor reveals the shame he feels for trading his humanity and family for whatever dark power he gained — into something of a teddy bear…albeit a big caped and helmeted teddy bear who tosses a little old man to his doom.

Let’s wrap this up. I know this will sound rather precious in a discussion of Star Wars, but it’s relevant. It all comes down to one question: What is art?

Star Wars is art, as are all films. But what is art? Is a piece of art a document of the artist’s level of ability and state of mind when that artwork was created? If so, is it right to change it, ever? Would not doing so alter its meaning? Let’s look at it another way.

Pick any work of art in any medium and play “what if.” What if Van Gogh had decided to go back and change his famous “bandaged ear” self portrait? What if he’d decided future generations shouldn’t see him looking so fragile? Or what if Jimmy Page were to decide he doesn’t like that guitar solo in “Stairway to Heaven” after all. Or what if it is decided upon high that the Bible needs a tighter third act?

Maybe this is the real question: When is a work of art finished? If you ask George Lucas, the answer might well be “When the artist is dead.” 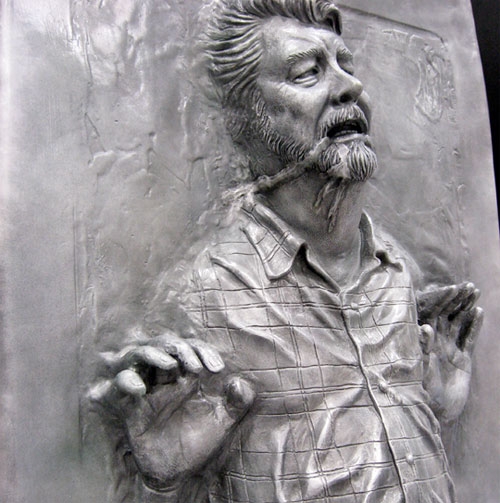