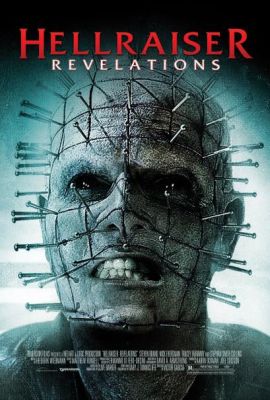 It’s been six years since we last encountered Pinhead and his band of merry Cenobites, but they are soon returning, for better or worse, in this series’ ninth movie, Hellraiser: Revelations. I think it’s safe to say that the only revelations to be had here are that this movie is bad and this franchise should be put out of our misery.

Written and directed by Clive Barker, the first Hellraiser wasn’t a game-changing film, but it was a solid horror flick with an interesting narrative and some cool visuals…well, cool for 1987 anyway. Barker’s direction was rather workmanlike, but Hellraiser did what it was supposed to do — enough so that I looked forward to a second installment. But then Hellbound: Hellraiser II came along and our romance was over. But that didn’t stop six more little Hellraisers from appearing.

I’d like to claim that each of these flicks followed my Law of Sequels, which states each film is half as good as its predecessor, but that would imply that I’ve seen all of them which, alas, I have not. Over the years, I’ve watched one or two and caught parts of the rest on cable and I can safely say that, in terms of quality, none have approached the first movie.

And, now, we have Hellraiser: Revelations, which hopes to be fashionable by employing the current fad of using video cameras and found footage. (Editor’s note: What, no vampires?) Plus, its budget was only $300,000, so this idea was no doubt both trendy and fiscally responsible.

It’s been reported that The Weinstein Company only made this flick to keep the franchise rights so they can reboot it at a later date, which sounds about right. Ever since I learned this, all I can think about is opening the dreaded puzzle box and seeing the Weinstein brothers emerge, dressed in Cenobite bondage gear and shouting, “We’ll tear your soul apart!”

It seems Bob and Harvey have already torn apart the soul of Hellraiser creator Clive Barker, who recently took to Twitter to complain about this new film, saying ever so eloquently, “I want to put on record that the flick out there using the word Hellraiser IS NO FUCKIN’ CHILD OF MINE! I have NOTHING to do with the fuckin’ thing. If they claim it’s from the mind of Clive Barker, it’s a lie. It’s not even from my butt-hole.”

For those of you not worried about your soul or Clive Barker’s anus, Hellraiser: Revelations will hit DVD on September 2. Watch it if you dare.

This article was posted in Other Awesome Stuff and tagged Clive Barker, Gary Tunnicliffe, Hellraiser, Hellraiser: Revelations, Other Awesome Stuff, Slammed & Damned, The Weinstein Company, Theron Neel, Victor Garcia. Bookmark the permalink. Follow comments with the RSS feed for this post.Trackbacks are closed, but you can Post a Comment.