It all started with a dream. Well, a nightmare actually. Francis Ford Coppola’s next film, Twixt, was delivered to him from his subconscious and, fittingly, concerns itself with art and the metaphysical act of creation. If that sounds too pretentious for your tastes, worry not. There are also vampires.

The man who gave us The Godfather and Apocalypse Now found the theme of his new movie in an alcohol-induced nightmare that “seemed to have the imagery of Hawthorne or Poe.”

“As I was having [this dream] I realized perhaps it was a gift, as I could make it as a story, perhaps a scary film, I thought even as I was dreaming,” Coppola said last year. “But then some loud noise outside woke me up, and I wanted to go back to the dream and get an ending. But I couldn’t fall back asleep, so I recorded what I remembered right there and then on my phone. I realized that it was a gothic romance setting . . . .”

After first writing it as the tale “Twixt Now and Sunrise,” Coppola has turned his dream into a cinematic nightmare featuring Val Kilmer, Bruce Dern, Elle Fanning and Ben Chaplin. Twixt stars Kilmer as a hack horror writer on a book tour who stumbles into a story that is more than it seems. And the deeper he goes, well, the deeper he goes.

The excellent trailer for Twixt is an interesting mix of humor and dark atmospherics, aided by Tom Waits’ graveled narration. This three-minute preview is a wonderful illustration of Coppola’s singular filmmaking gifts.

As a director, Coppola is something of a dichotomy. He’s part populist moviemaker and part auteur. Sections of this trailer look like something you’d see in any cineplex, while other shots would seem more at home in an art house. But this is nothing new. Coppola has always walked the tenuous line between art and commerce. 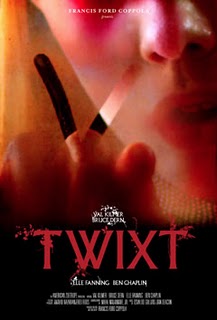 Getting his start under the wing of the legendary Roger Corman, Coppola learned the ropes on films like The Bellboy and the Playgirls, Dementia 13 and The Terror in the 1960s before earning cinematic immortality in the ’70s with the Godfather saga, The Conversation and Apocalypse Now.

The director famously crashed and burned in the early ’80s with the ambitious musical One from the Heart before reinventing himself with a series of smaller films that drew on everything from German Expressionism to John Grisham.

And now, Coppola is back where he started. He recently described Twixt as “one part Gothic romance, one part personal film and one part the kind of horror film that began my career.” But that’s not entirely accurate.

While it’s true that Twixt is a horror flick, Coppola is employing entirely contemporary techniques and strategies on this new film. Not only were portions of Twixt shot in 3D, but the director has also declared plans to go on a multi-city tour with the movie, during which Coppola will “remix” Twixt by re-editing the flick as it plays, using modern digital equipment.

Maybe Twixt will herald a new era in Coppola’s career, one in which he delights in “the evolving technology of the cinema.” Maybe he’ll crash again. But that’s all right. If nothing else, it’s nice to see a legendary filmmaker playing with possibilities of a new age, rather than bemoaning their existence. That’s the mark of a true artist.

This article was posted in Other Awesome Stuff and tagged Apocalypse Now, Ben Chaplin, Bruce Dern, Dementia 13, Elle Fanning, Francis Ford Coppola, horror, One from the Heart, Other Awesome Stuff, Roger Corman, Slammed & Damned, The Bellboy and the Playgirls, The Conversation, The Godfather, The Terror, Theron Neel, Tom Waits, Twixt, Val Kilmer. Bookmark the permalink. Follow comments with the RSS feed for this post.Trackbacks are closed, but you can Post a Comment.