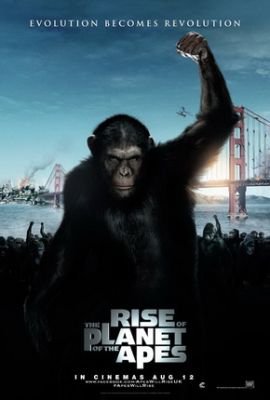 What if humans weren’t on top anymore? Sure, we rule now, but what if something came along and disturbed the established order? That’s the question that ran through my mind as I watched director Rupert Wyatt’s splendid new movie, Rise of the Planet of the Apes.

A film that acts as both a reboot of and an origin story for the Planet of the Apes franchise, Rise of the Planet of the Apes opens with medical researcher Will Rodman (James Franco) working on a cure for Alzheimer’s, a very personal mission since his father suffers from the disease. After getting phenomenal results from his experiments on a chimpanzee named Bright Eyes, he’s forced to start from scratch after Bright Eyes flies into a violent rage, trashes the lab and assaults the board of directors.

But Rodman soon learns that his Wonder Drug was not at fault. Bright Eyes was not crazed; she was protecting her newborn, which Rodman brings home to raise as his own. As the baby, dubbed Caesar, grows older, it becomes apparent he’s no ordinary chimp. By the time he’s 3, Caesar can communicate fluently through sign language. He’s smarter than a very smart 10 year old human and plays a helluva game of chess. Rodman deduces that Caesar’s intelligence stems from mutated genes due to his mom’s ingestion of the Wonder Drug, which apparently not only repairs damaged brain cells but improves them as well.

As Caesar grows older, he moves from cute, smart child to sullen, brilliant teenager — petulant and increasingly unhappy with his lot in life, as are most teens. He becomes aware that he’s adopted and other animals aren’t accorded the freedom he enjoys. One day, when a neighbor with anger management issues harasses Rodman’s addled dad (John Lithgow), Caesar flies into a rage and attacks the attacker. Animal control is called and Caesar finds himself in jail. Well, a shelter for troubled apes is more accurate. Naturally, it’s not long before Caesar is running the joint.

In the meantime, Rodman has been forced to explain to his comely veterinarian girlfriend (Frieda Pinto) why Caesar is so miraculously smart. And, of course, she explains to him that Some Things Are Meant to Be Left Alone. This lesson is driven home when Caesar steals the Wonder Drug and uses it to mount an army of intelligent apes to strike back at a world unfair.

With Rise of the Planet of the Apes, director Rupert Wyatt, working from a script by Rick Jaffa and Amanda Silver, has delivered a startlingly good summer action flick that efficiently manages to touch on several genres before the credits roll.

The film kicks off as a standard-issue medical thriller, but halfway in it morphs into a first-rate prison movie replete with a sadistic guard, fights in the yard and a clever breakout sequence. Then, Rise closes as a thrilling action flick with Caesar’s army of apes engaging in, of course, guerilla warfare strategies that would make Stallone’s Expendables superfluous.

As the human star of Rise, James Franco plays it completely straight and is surprisingly effective as a man torn by his varied personal and ethical responsibilities. But the true star of Rise of the Planet of the Apes is Andy Serkis, who dominates the film without ever actually appearing onscreen.

With his work for Peter Jackson as Gollum and Kong, Serkis has become the acknowledged master of motion capture performance. The effects here are top notch — Caesar really looks like a real chimpanzee most of the time, and with his performance Serkis truly brings the character to life. Denied the benefit of dialogue for most of the film, Serkis is able to deftly communicate Caesar’s thoughts with a highly physical portrayal that depends as much on poignant glances as brutal action. 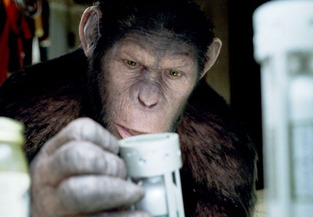 From a geek perspective, one of the nicer things about Rise of the Planet of the Apes is that it’s not just a good movie — it’s also a good Apes movie. It fits in the series quite well. If you’re a fan of the franchise, you’d probably like to forget Tim Burton’s regrettable 2001 “reimagination.” But Rise works, providing a credible beginning to the story with subtle nods to the original flick scattered about for true fans to find and delight in.

The 1968 Planet of the Apes found parallels in contemporary events, namely the civil rights movement of the 1960s. This new flick is not that obvious, but one could make connections to current issues if one tried. In that regard, Rise of the Planet of the Apes might serve as a cautionary tale.

You’ve likely noticed that our lovely planet seems to be in the midst of certain changes. Sure, it’s mostly the climate now, but what if the changes shift from the environmental to the bestial? We’re on top of the food chain at the moment, but we haven’t always been there. Something could come along and disturb the established order. We might do well to take a cue from Rise of the Planet of the Apes and then follow the advice of the classic Curtis Mayfield song: “People Get Ready.”

This article was posted in Reviews and tagged action, Andy Serkis, Brian Cox, Frieda Pinto, James Franco, John Lithgow, Reviews, Rise of the Planet of the Apes, Rupert Wyatt, Science Fiction, Slammed & Damned, Theron Neel. Bookmark the permalink. Follow comments with the RSS feed for this post.Trackbacks are closed, but you can Post a Comment.