‘Dead Hooker in a Trunk’ Breaks Out 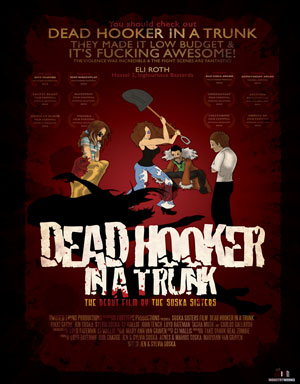 Canadian filmmaking force Jen and Sylvia Soska have taken the next step in their bid for world domination and, personally, I’m surprised it took this long.

It was announced yesterday that the Soska twins’ killer opening salvo, Dead Hooker in a Trunk, would receive a special limited theatrical release across the U.S. and Canada courtesy of IFC Midnight. If you’re like me and just can’t make those midnight movies like you used to, IFC Midnight is also making the Twisted Twin’s cult sensation available on VOD starting August 3. The specific screening information is not available yet, but you can easily get the VOD details on the IFC Films website.

With a schedule consisting of eclectic original programming and the best of indie film, the Independent Film Channel is one of the finest and most important basic cable channels available. And if you hear “indie film” and think IFC shows only whiny mumblecore movies about self-obsessed twenty-somethings, you’re wrong. IFC regularly airs classic and contemporary independent horror films as well as a weekly midnight grindhouse flick — and this is the very reason that IFC’s embrace of the Soskas makes so much sense.

IFC obviously knows a good film when it sees one, and as one of the most impressive debuts in recent memory, Dead Hooker in a Trunk is definitely a good film. And IFC isn’t the only one who thinks so. I have it on good authority that a deal has made with a distributor for a U.S. DVD release too.

The Soska sisters have been working their collective butt off lately to make their art. They recently disclosed their desire to shoot an Addams Family film and they are also in production with their trusted comrade-in-arts CJ Wallis on another feature, American Mary. Now comes this cool announcement about their disruptive Dead Hooker, who obviously isn’t quite dead yet.

It’s often said that victory in battle belongs to those who stay the course, but because they’re already doing what they love, I’m sure the Soskas feel they’ve already won the war. Behold the Soska siege, coming soon to a theater near you.

This article was posted in Updates & Teasers! and tagged American Mary, CJ Wallis, Dead Hooker in a Trunk, grindhouse, IFC Midnight, Jen and Sylvia Soska, Slammed & Damned, The Addams Family, Theron Neel, Twisted Twins, Updates & Teasers, video on demand. Bookmark the permalink. Follow comments with the RSS feed for this post.Trackbacks are closed, but you can Post a Comment.