I just finished watching The Bleeding and I’m just going to dive in here. I won’t bother developing a clever thesis statement or a hook to hang the review on. The Bleeding is just a bad movie. I mean, bad — B. A. D.

You look at the poster for The Bleeding and you see names like Vinnie Jones, Armand Assante and Michael Madsen, and you think, “Huh, those are some pretty big names.” Let me hip you to a little insider movie secret: They aren’t really big names. They’re “big enough” names, as in big enough to get a bad movie sold to a distributor, but not big enough open a “real” movie. Red flag.

The Bleeding was made a couple of years ago and it’s been sitting on the shelf for a while, even with Michael Madsen and Vinnie Jones attached. I imagine the reason is because there’s not one element of this movie that is not terrible. Actually, the whole thing is worse than terrible; it’s laughable. The script, the direction, the performances. It’s all just so, so awful.

Nominally a vampire flick, The Bleeding is really a C-grade action movie dressed up with vampire trappings because vampires sell. The movie stars someone named Michael Matthias, who appears to want to be a second-rate Vin Diesel. Wait, you say you thought Vin Diesel was a second-rate Vin Diesel? So did I, but Matthias’ work in The Bleeding is so dreadful, it makes you appreciate what a Vin Diesel actually does. (Plus, Diesel once showed promise as something other than a living cartoon — anyone else remember Boiler Room, in which Diesel was truly compelling?)

It takes a specific talent to anchor an action movie and make the implausible seem plausible. Diesel has this talent. Matthias seemingly has no talent. He’s bald and ripped and looks pretty good holding a machine gun, but he’s extremely awkward on camera and his constant voice-overs sound as if he’s reading a particularly unexciting grocery list. It doesn’t help that the script is full of howlers, made worse by his tone-deaf line readings. I don’t know how he ended up the star in anything. I’m guessing he was a stunt man or wrestler or something. He’s listed as a producer here (always a red flag), so maybe he bought his way in. I can’t say for sure because details about The Bleeding are hard to come by, which is another red flag. It’s been made for our consumption and dumped on the market. Now let’s just move on to the next piece of product. 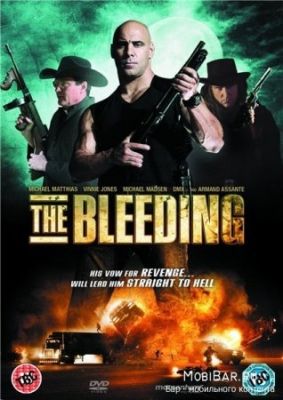 I’m guessing Vinnie Jones, Michael Madsen and Armand Assante owed someone a favor or are having tax problems or something. I’m sure the producers probably were able to meet Madsen’s rate and he thought, “What the hell. It’s a couple of days’ work. Fast money.” And that’s exactly what his performance feels like. Madsen comes in and does what he does, much like Christopher Walken, and he’s out. The same goes for Assante, who employs a risible Southern accent in his one scene. I like to think he chose it to amuse himself. Now, maybe Vinnie Jones saw this as a way to stretch artistically. All he does, pretty much, is play football toughs or gangsters. A vampire king could be seen as growth, I imagine. But he is so — man, I have to find another way to say bad. I usually like Jones, but he’s just horrible here. But I have to fault the director with a lot of this. “Over-the-top” does not begin to describe his work. Someone should have dialed him down, like the director.

Besides helming the whole affair and making sure things get done, one of a film director’s main tasks is to protect his/her actors. The actors must have faith that the director will keep them from looking ridiculously terrible. And I have to say director Charlie Picerni fails at this task. But at least he’s consistent. He fails at all other tasks as well.

When I researched Picerni’s background, things started falling into place. Picerni has a very extensive background in directing stunts and second units in movies and television shows, like Knight Rider and Starsky & Hutch. And that’s a good way to explain what The Bleeding plays like. The whole film looks and feels like it’s composed of second unit pickup shots. “We got it? Okay, moving on, people!”

You know me. I usually can find something to like in a movie, no matter its quality. Let’s see. I suppose the score isn’t as bad as the rest of this whole mess. And actress Rachelle Leah isn’t as breathtakingly atrocious as everyone else (though she’s not good, per se). But if that is the best thing I can find to say about a movie, my friends, it’s just a bad movie. And The Bleeding is just a bad movie. I mean, bad — B. A. D.