‘Femme Fatales’ to Appear on Cinemax—Really? 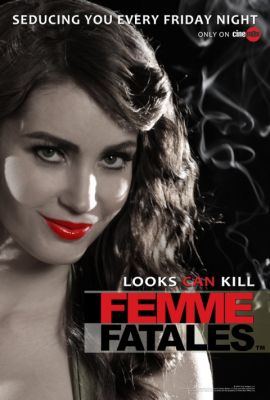 Tonight — yes, Friday the 13th — a new show is premiering on Cinemax, that fine purveyor of inspirational After Dark programming such as Zane’s Sex Chronicles and Co-Ed Confidential 4Play. This new series is called Femme Fatales and I don’t know if it will be any good, but it just might be better than it needs to be.

Femme Fatales is being promoted as a female-centric film noir version of The Twilight Zone, drawing influences from pulp fiction stories and graphic novels…but with, you know, lots of T&A. It comes to us from the overstimulated minds of Mark A. Altman and Steven Kriozere, which seems weird at first because both of these guys have respectable day jobs in network television. But it starts to make sense when you realize they also have a bit of experience with the ol’ slap and tickle.

Altman and Kriozere work as producers on Castle, the ABC detective romp starring Nathan Fillion and Stana Kanic. But Altman has a background in low-budget horror and made his geek bones by writing and producing the 1998 fanboy flick Free Enterprise. Altman also publishes Femme Fatales magazine, from which this new series gets its name. Kriozere has a pedigree in weekly television that includes NCIS as well as genre series like Team Knight Rider and the Pamela Anderson show V.I.P., which was also better than it needed to be.

Each episode of Femme Fatales (Fridays, 11 p.m. ET/10 p.m. CT) will be hosted by the “mysterious and enigmatic” Lilith, played by Tanit Phoenix. I’ve never heard of Phoenix, but the Femme Fatales press release tells me she’s “an international model best known for her roles in Death Race 2 and Lost Boys: The Thirst.” I suppose I’ll have to take their word on that.

I guess this could be good. In principle, there’s nothing wrong with softcore. Like any other often-reviled artistic genre (e.g., disco, musical theater, romantic comedy), softcore has its good and bad. Its success lays in how it’s handled. So far, the producers are saying all the right things. They reference awesome flicks such as Bound, Dead Calm and Red Rock West. They promise Femme Fatales will feature women who “find extraordinary ways of coping with their problems, channeling their survival instincts and bringing out their inner guile.” Hey, sounds great. But then there’s the clip below. 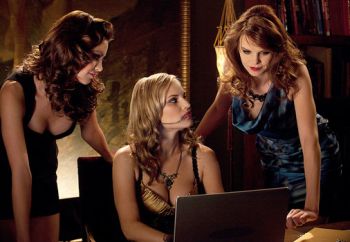 Based on this little preview, the connection to true film noir looks to be tenuous at best. It appears the actresses understand the hair and costumes pretty well, but aren’t acquainted with the concept of the femme fatale or her role in noir, which isn’t too surprising. And it seems the femmes’ promised extraordinary coping skills are actually extraordinary coupling skills. I’m betting there’s no manipulating or conning that doesn’t involve a tastefully lit, overheated roll in the hay. Which is fine. That’s what this is really all about and everyone knows it.

Being a nerd, I love Free Enterprise and I’m a fan of Castle, despite itself. That show’s writing is often hacky and precious, but it can be quite clever and fun. Plus, its cast is so good that it usually works. And V.I.P. was much the same, though with a lesser cast. Perhaps Altman and Kriozere will be able to bring some of the tongue-in-cheek enjoyment of their past work to this experiment in erotica. If they can pull it off with a modicum of wit and style, Femme Fatales could be (say it with me) better than it needs to be. And what else do you really need from Cinemax After Dark?