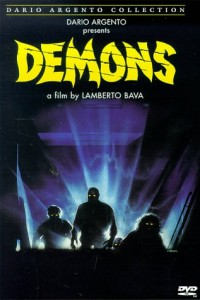 Though I had never seen it, I’d heard a lot over the years about Demons, the infamous 1985 Italian horror film.  It has a reputation as being one of the scariest, grossest movies of all time.  Admittedly, it does have an impressive pedigree.  It was produced by horror/giallo maestro Dario Argento (Suspiria, Deep Red) and directed by Lamberto Bava, whose father was noted horror stylist Mario Bava (Black Sabbath).   Now, I don’t mean to be a killjoy, but after having seen the movie, I don’t see what all the fuss is about.  Granted, it’s somewhat ambitious and has a colorful character or two, and there are a few cool gross-out effects, but I spent most of this flick’s running time saying, “This is the movie I’ve been hearing about for years?”

There’s not much in the way of plot to relate (and, supposedly, there wasn’t supposed to be), but here goes: Cheryl, our heroine, is given free passes to the grand opening of The Metropol, a movie palace in Berlin.  She invites her friend, Kathy, to go with her.  When they arrive at the theater, they find props on exhibit in the lobby that are from the movie that’s showing, which turns out to be a horror film—much to Kathy’s dismay—coincidentally called Demons. (See? It’s meta!)  Various other people are milling about the lobby, including a pimp and his two employees.  One of the prostitutes decides to slip on a mask that’s part of a display, cutting her cheek (and letting blood) in the process.  After the movie in the movie begins, the girl’s cheek starts bleeding again and she goes to the restroom to attend to it.  Meanwhile, onscreen, one of the characters in the film puts on the same mask and cuts a cheek too.  In the bathroom, the hooker’s tiny cut festers and explodes, and she becomes an ugly, murderous demon.  Before long, it becomes apparent that events in the film are mirroring events in the movie theater. (See? It’s ambitious!)

The demonic prostitute begins to kill members of the audience.  And those she doesn’t kill, she bites or scratches, transforming them into demons as well.  Soon, half the audience have become demons and the other half are battling for their lives.   Also, there’s a subplot about a carload of punks that are driving around and end up in the theater too, but they are so stupid, they deserve whatever they get. (Hmmm, maybe there’s more plot that I thought.)

Here’s what I think: Demons was a kinda cool B movie that caused some buzz back in 1985, but it hasn’t aged well.  Take it from me, the ‘80s were a sad time for movies.  Anything that even seemed remotely cool was seized upon and proclaimed to be amazing.  Granted, there were some really good horror flicks made back then, but this isn’t one of them. 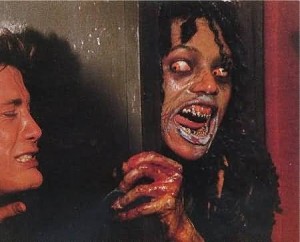 There is some groovy gore, and the film has an air of Italian cool about it, but Demons is so artlessly executed that it takes away from any goodwill the movie builds. The performances are pretty bad all around, and the dubbing is horrible, as is the voiceover acting.  We never really get any character development, and the movie climaxes with a deus ex machina that is so improbably outlandish that, well, I had to both laugh and roll my eyes.  The event is somewhat explained after the fact but, again, it’s handled so badly that it just annoyed me.  One of the movie’s good points is its soundtrack, which is filled with some good ‘80s metal tunes.

I usually love movies like this. And I really expected (and wanted) to like this one. But I’m afraid that Demons is one movie that just did not possess me.*