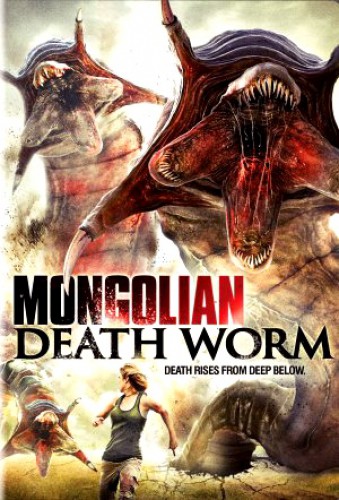 There’s a lot going on in Mongolian Death Worm, the underachieving Syfy original movie directed by Steven R. Monroe. Is it the story of a self-described “scoundrel” hunting for treasure? Or is it the tale of a dedicated doctor trying to save a village from pestilence? Or is it the account of oil exploration run amok that is also a metaphor for the way humanity is looting the resources of Mother Earth to deadly consequence? One could say it’s all those things, and maybe that’s why Mongolian Death Worm fails to entertain as well as it might. Or maybe it’s just because the filmmakers don’t deliver any more than is absolutely necessary. Yeah, that’s probably it.

Sean Patrick Flanery plays Daniel, a treasure-hunting scalawag with a heart of brass who has spent his career searching Mongolia for the tomb of Genghis Khan. He was once a devoted idealist, but has since had to compromise his beliefs by dealing with the adequately evil Kowlan (Billy Blair, doing his best Nic Cage), the local crime lord. When he meets Alicia (Victoria Pratt), a tough, blonde spitfire of a doctor trying to do good works, he is shaken from his cynicism — but, thankfully, not before they embark on an adventure involving a crooked oil company, ancient treasure and, yes, Mongolian death worms. 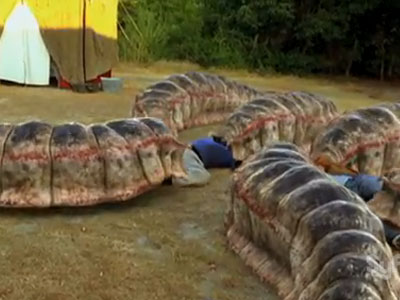 I have to say, the filmmaking is entirely competent. It’s certainly good enough for what it is. Director Monroe, who recently foisted the totally unnecessary remake of I Spit on Your Grave upon us, is an old hand at Syfy original movies, having already directed a few before Mongolian Death Worm crawled along. And maybe that’s the problem. There’s just no spark. It feels like Monroe is going through the motions, getting his shots and making the day. Everything feels slightly forced. The performers do what they can to instill a spirit of fun, and they succeed to a degree, but in the end it’s just not enough to persuade.

Syfy original programming has long been the place where actors with mediocre careers go to pay the rent, and in Mongolian Death Worm, that actor is Sean Patrick Flanery, the likable star of The Young Indian Jones Chronicles, Powder and The Boondock Saints. Here, he manages to make his character likeable enough and hits all the requisite notes, but there’s also a slightly frantic, desperate air surrounding the performance. I was a bit sad to realize I couldn’t tell if the desperation belonged to Flanery or the character he’s playing. Also, Flanery seems to have finally lost the boyishness that was his trademark for so long. In Mongolian Death Worm, he appears tired, with a face that’s weirdly puffy. I mention this only because I fear he’s fallen victim to the urge to seek his youth through medical means. But maybe not. The fact that I wonder speaks volumes. To whom it may concern: Plastic surgery is not an actor’s friend. It’s hard to convey emotion to the camera if your face doesn’t move or is distracting for all the wrong reasons. 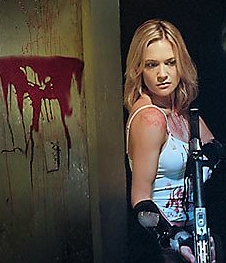 It’s a good thing that the talented Victoria Pratt is on board to save the day as Dr. Alicia. Pratt is a veteran Canadian actor who genre fans will know from her fine work as the star of syndicated television series such as Cleopatra 2525 and Mutant X. Through the years, she’s crafted a solid career in episodic TV and low-budget film projects. She’s even been in a Lifetime movie with Tori Spelling, which is the mark of a game actress that’s done it all. Pratt does what she can to elevate the Mongolian death proceedings, but even she can’t lift the spirits of those involved.

With Mongolian Death Worm, Steven R. Monroe has delivered a perfunctory, though lumbering creature feature without the spark of excitement necessary to allow him to loudly proclaim “It’s alive!” But the filmmaker’s greatest failing isn’t that his creation is so blah, but that it never manages to make one forget about the other, better giant worm movies. After I finished watching Mongolian Death Worm, I thought to myself, “Well, that was a perfectly adequate giant worm movie, but it was no Tremors.” Perhaps it can’t be faulted for that though. The same can be said about almost any giant worm movie, right? I mean, golly, even Dune is no Tremors and it was made by David Lynch. But I digress.

It comes down to this: If you want to spend a night gellin’ to giant CGI worms eating people, you could do worse than Mongolian Death Worm. It’s a perfectly passable little Syfy flick that totally fulfills its title, but that’s the problem. It gives you exactly what’s promised, nothing more. And when watching giant worms eat people, don’t you want a little more? Yeah, you know you do.