Now Playing at the House of Grind—Repo Chick 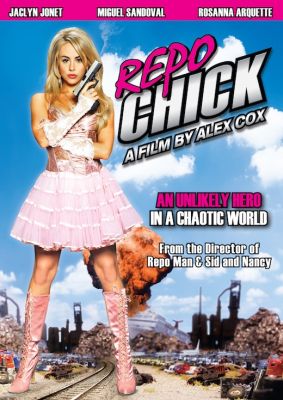 In Repo Chick, ‘80s punk provocateur Alex Cox turns his attention to the state of contemporary society. Needless to say, he doesn’t like what he sees. And who can blame him. Even on the best of days, you have to admit it’s pretty grim out there.

Told through the eyes of a Paris Hilton analogue, Repo Chick is the story of Pixxi de la Chasse (Jaclyn Jonet), a spoiled celebutante who’s disinherited by her family for bad behavior. This forces her and her self-serving entourage out into the cold, cruel world. Luckily, Pixxi lands a job as a repo chick, which brings her into contact with some very bad people doing very weird things.

With his latest flick, Cox takes on the world in which we live and everything is fair game. As he tries to make sense of what he sees, Cox takes shots at tabloid culture, the Internet, modern weaponry, reality television, the mortgage crisis, unemployment, right-wing extremists and pretty much every –ism you can think of. It’s all told with a kitchen-sink approach; Cox throws everything against the wall, and, surprisingly, some of it sticks.

Almost all of Repo Chick is filmed against green screens, employing miniatures and models, with no effort made to make things appear realistic. With influences ranging from Dr. Strangelove to Ralph Steadman, Cox weaves a fanciful, satirical tale in which no one is without blame. After going to work for Arizona Gray (Miguel Sandoval) as a repo chick, the put-upon Pixxi finds herself dragged into a wacky terrorist plot to outlaw golf. Along the way, she meets a colorful cast of characters played by Rosanna Arquette, Angela Sarafyan, Chloe Webb, Del Zamora and Jennifer Balgobin, among others. It’s telling that Pixxi is the most sympathetic of the bunch.

Cox seems to realize that, though she’s an inconsiderate, self-important brat, Pixxi is a symptom of the zeitgeist in which she was raised. But this opinion is aided by Jonet’s winning portrayal of Pixxi as a cantankerous can-do gal who’s excited at her newfound repo skills. Sure, she’s arrogant and entitled, but maybe her astounding success justifies a little youthful arrogant entitlement. 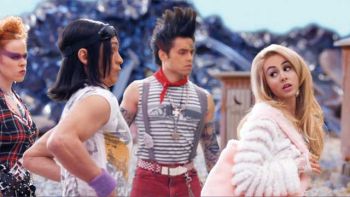 In certain circles, Cox is viewed as an indie prophet, a lightning rod imparting wisdom from on high. But he’s also seen as combative and belligerent. Cox has had a rocky career and was essentially blackballed for a while. Accordingly, he’s long struggled to get his films made through traditional means. Lately, he’s employed a DIY approach, producing microbudget features, the second of which is Repo Chick. Sadly, the points made here aren’t especially earthshaking. That he actually got Repo Chick made and distributed might be the prophet Cox’s greatest teaching, resulting in a rather McLuhan-esque lesson: “The method is the message.”

It must be noted that Repo Chick is not a sequel to Repo Man, Cox’s 1984 cult favorite. Certain plot points are vaguely similar and the two films share a few actors. But other than those similarities, the movies are not related.

In the end, Repo Chick is more a curiosity than a must-see. It’s been a while since the cultural and stylistic battles Cox fought with films like Repo Man, Straight to Hell and Sid and Nancy. Based on the living screwball cartoon that is Repo Chick, it’s clear Cox is still at war, though he’s changed his tactics somewhat. He’s now more merry prankster than revolutionary gangster. But, hey, at least he’s still fighting.