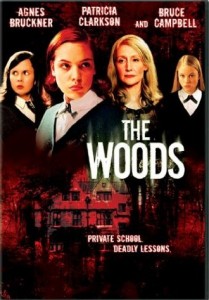 Based on how much I adore director Lucky McKee’s film May, I was really looking forward to seeing its follow-up, The Woods.  Was I disappointed?  Somewhat.  Am I surprised by the fact that I was disappointed?  Not really.  I love May so much that almost anything McKee did was bound to not measure up (although his 2006 Masters of Horror episode, “Sick Girl,” comes extremely close).

The Woods starts wonderfully, with a classic storyline well told and spot-on performances.  The movie is set in the mid-sixties, and McKee does an amazing job of evoking the period.  In fact, the film’s first hour is so atmospheric and satisfying that it’s upsetting when it all seems to fall apart in the last act.  But this is a standard problem in all forms of writing.  That final act can be a bitch, and as good a director as McKee is, he can’t quite fix this one glitch.  I seem to remember tales of a troubled shoot, which might have involved starting production before there was a locked script (but I’m not sure about that).  Also, this is the first movie McKee has directed that he has not written.  So, I’m sure we can see all the ingredients are there for an unsatisfying flick.  But as many movie fans know, “unsatisfying” does not necessarily mean “unwatchable.” And The Woods is quite watchable.

It’s a shame that United Artists dumped The Woods straight to DVD.  I would’ve liked to have seen it get a true release.  It’s better than most scary movies out there these days.  Granted, it’s not full of blood and guts or naked nubile teen girls, so there’s a good chance it would’ve bombed.  But still, to see a real supernatural horror flick—the kind they don’t make anymore—released in theaters would have been a treat for me.  Less is more, and in horror, atmosphere is everything. 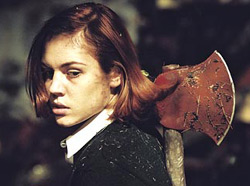 Agnes Bruckner is very good as Heather, a troubled teen sent away to a mysterious all-girl boarding school.  Bruckner gives a wonderfully nuanced performance in what could have been a cliché role.  Patricia Clarkson, one of my favorite actresses, does what she can with the part of headmistress of the school.  And Bruce Campbell gets to show some character-actor chops as Heather’s father.  He effectively underplays his character, which is quite a change for Bruce.  It’s nice to see he has it in him.

This article was posted in Reviews and tagged Agnes Bruckner, atmospheric, blood, Bruce Campbell, horror, Lucky McKee, May, Patricia Clarkson, Reviews, Sick Girl, Slammed & Damned, The Woods, Theron Neel. Bookmark the permalink. Follow comments with the RSS feed for this post.Trackbacks are closed, but you can Post a Comment.