Movie fans have long loved director Stuart Gordon’s Re-Animator, renowned for its twisted sense of humor and copious gore. Now, this horror gem is gaining a whole new audience. Gordon has recently taken his 1985 cult classic and, ahem, re-animated it as Re-Animator: The Musical, a tune-filled stage production that’s been packing them in since it opened in February.

Playing at the Steve Allen Theater in Hollywood, Re-Animator: The Musical is directed by Gordon and stars George Wendt, Graham Skipper, Chris L. McKenna, Rachel Avery, Cynthia Carle and Jessie Merlin. Originally booked to run through March 27, the show has done so well that its run has been extended through May 29.

With music and lyrics by songwriter Mark Nutter and a book by Gordon, William J. Norris and frequent Gordon collaborator Dennis Paoli, Re-Animator: The Musical might seem like an unlikely entry in the popular trend of converting film into musical theater, though it’s not as strange as you’d think.

Admittedly, Re-Animator is not the first flick you think of when the word “musical” is uttered. But horror and musicals have a fairly distinguished history (make your obligatory Cats jokes here). The 1975 film The Rocky Horror Picture Show began life onstage in 1973 as The Rocky Horror Show. And Roger Corman’s 1960 low-budget movie The Little Shop of Horrors was reborn as a 1982 off-Broadway musical, which was turned into a hit 1986 film directed by Frank Oz. More recently, Sam Raimi’s Evil Dead flicks became the inspiration for a show called Evil Dead: The Musical that has been running somewhere consistently since its 2003 inception.

Any show based on Re-Animator is only as good as its gore, and Gordon knows it. So, he brought in Tony Doublin, John Naulin and John Beuchle, who handled the special effects on the film, to handle the blood, which flies so generously that the there’s a designated “splash zone.” Those who sit in the first three rows are given ponchos to help protect them from the grue. 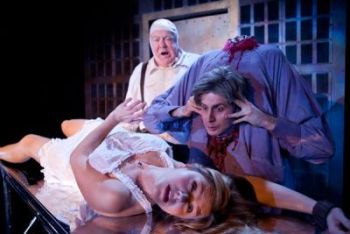 So far, the reviews for the show have been unanimously positive, with both the horror press and traditional entertainment media giving the show amazing notices. Showbiz bible Variety even said, “Re-Animator: The Musical is an entertainment of rich rewards and high accomplishment.”

Actress Liesel Hanson, an old acquaintance of mine, is a member of the show’s chorus. Hanson is a veteran stage performer and a frequent habitué of Trash Film Orgy’s warped projects — look for her as a space pirate in TFO’s upcoming movie Planet of the Vampire Women. In Re-Animator: The Musical, Hanson plays a nurse, a medical student, a cheerleader and a zombie, and she’s also the understudy for two roles. I got in touch with her for this article and she was effusive in her praise for the production.

“I feel so totally lucky to be involved in this show,” Hanson told me. “It’s like winning the lottery. I’ve been a fan of Re-Animator for a long time, and I definitely love musicals, but it’s still been so much cooler than I could have imagined. The best thing about it is suddenly being in this group of super-nice, amazingly talented performers.”

Even though she’s thrilled to be involved, Hanson wasn’t sure the play would do as well as it has. “I had no idea what a broad appeal this show would have,” she said. “We get a lot of hardcore horror fans in the audience, but we’ve also had lots of folks coming out who have never seen the original film, who have no idea what they’re in for.”

Hanson went on to say, “We have had the best, most responsive audiences. It’s so rewarding to go into the lobby after a show and see it packed with happy, smiling blood-splattered faces. We’ve had people come back to see the show multiple times and bring their friends. I think we’re pulling in a younger audience than the typical theater crowd, but it’s been a really mixed bag, and everyone seems to love it. During the preview performances, Stuart [Gordon] would do a talkback with the audience after the show, and our audiences kept demanding more blood, so we’re really giving it to them.”

Speaking of Stuart Gordon, I asked Hanson how she’s enjoyed working with the legendary director. “Stuart is fantastic to work with. He is totally calm and patient as a director, and I feel like that sense of calm radiates throughout the cast and keeps everyone loose and happy,” she gushed. “Even when we were dealing with tricky special effects or working long difficult days, he never seemed stressed out. I would jump at the chance to work with him again. For such a sweet, funny guy, he has an amazing eye for gory, messed-up stuff.”