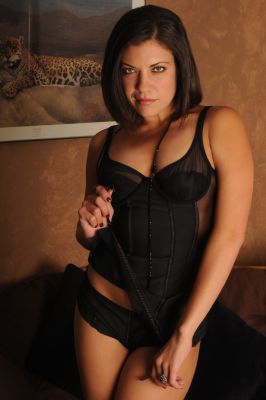 At the age of 14, Tiffany Shepis made her film debut with a bit part in Troma’s 1996 cult fave Tromeo and Juliet. Since that unassuming start, Shepis has gone on to become one of indie horror’s most loved, and most talented, performers. I recently sat down with Shepis for a free-wheeling, unfiltered conversation about her life, her career, and long hours, bad food and stupid people.

First, congratulations on your recent nuptials, Ms. Honeymooner. A little birdie named Heidi [Martinuzzi] told me you’ve married Sean Tretta, the director of your wonderful new film, The Frankenstein Syndrome. Make with the dish, sis. Had y’all known each other previously? Did you swoon at first sight?

Thanks! Yeah, that li’l birdie Heidi has a big fucking birdie mouth! [laughs] Yes, I did get married to Sean. We met briefly before working together on Frankenstein Syndrome at a Fango [Fangoria convention] in Los Angeles. Also spoke once about being in the sequel to my crapfest of a film, Death Factory. He asked me to be in The Death Factory Bloodletting. I would have, ‘cause he was super-charming, but charm doesn’t get you far when there is no money. [laughs] So swoon at first sight? No. We were making a movie and trying to make a good one. It wasn’t till I went for drinks with some of the cast and crew after filming and we invited Sean that I realized he was not just a good director but a super-cool dude. We drank a lot and, well, 4,578 drinks later…married! [laughs]

Wow, when I interviewed Sean recently, he told almost the exact same story. If this were The Newlywed Game, you’d win a car! Are you guys planning a reign as indie horror’s power couple?

[laughs] No. Wait — is there a power couple we need to beat out? I hate competition. If not, then sure, but only if we change the name. “Indie horror’s power couple” sounds really gay.

Well, there’s a few out there, but I don’t think any are officially reigning at the moment — so this is your chance! Anyway, some people prefer not to work with their spouse. Now that you and Sean are together, will you continue to work on each other’s projects?

Sean’s my best friend, so yeah, I think we will continue to work together. We have started trying to raise money for one he wrote called Wood, Glass, and Bone, so if that happens, I’ll be a producer on that. He’s super-talented and I’m, well, the better half of indie horror’s power couple. See? Gay! Seriously though, we bounce ideas off each other every day. He tells me ideas for new projects. I read him my scripts. It’s a pretty perfect partnership. I guess it also helps that he knows I’m always right! [laugh]

That’s a valuable trait in a partner, and even more so in a spouse. You’re a producer on The Frankenstein Syndrome, as well as the star. This is not the first flick you’ve produced. Are you consciously crafting a career behind the lens to prepare for the day when you’re no longer in front of the camera? Or are you just trying new things?

I like the producing side of things. If I really dig the project, why wouldn’t I want to be more involved? I’ve been in this business a long time and have gotten to know a lot of really cool people that are willing to help on my projects. When I’m a producer on something, I get to help gel that crew together so we can make a better movie. Like, “Hey guys, I know a great FX guy” or “Hey, call this distributor.” When you’re just an actress, it’s like show up and do your lines, leave, then they will call me to get post FX guy info and numbers to distributors. I thought if I’m going to do the work, might as well share some of the pie.

Another flick you both acted in and helped produce was Timothy Friend’s Bonnie and Clyde vs. Dracula. You were amazing in that movie, by the way. I asked Trent Haaga whether he did any research, since he was playing a real person, and he kind of laughed and said no. What about you? Did you research Bonnie Parker?

No, I didn’t research Bonnie Parker either. I had no idea that Bonnie and Clyde vs. Dracula was going to turn out as fun and cool as it did. I thought, “Okay, I’m going on to another low-budge crap period piece in KC.” I was blown away by what Tim and Jenn Friend did with it. 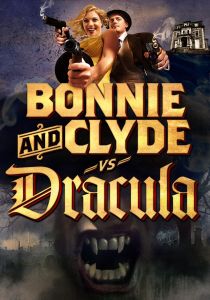 Jenn almost stole the flick from you. Almost.

Talented group of people out there in Kansas City! People say they dug my Bonnie and I think Trent has won a few awards for his Clyde, so maybe our lack of research style was the way to go. [laughs]

You recently shot The Violent Kind with the Butcher Brothers. I haven’t seen it yet but, apparently, you give quite a performance. They described you in a recent interview as “somewhere between creepy, violent and sexual.” I’m guessing that’s high praise from these guys?

Creepy, violent and sexual? That’s awesome! I want that on my gravestone. [laughs] I do believe that is high praise from the Butcher Brothers!

[The Butcher Brothers are] getting quite a rep. You’ve worked on countless sets. Is working with them any different than the usual low-budget flick?

First of all, yes, it was very different than the usual low-budget flick. I mean, we had the producers of Rob Zombie’s Halloween and the exec producer of The Texas Chainsaw remakes hanging out on our set. Usually it’s the director’s mom. So yeah, different. Also different is that we had two directors. I wasn’t sure how that was going to work. Like, I thought I was going to ask a question and they were going to get in to a little bitch fight about who’s turn it was to direct — totally not like that. They are best of friends and make everybody on their set feel like they are part of a big family. Even our producer, Jeff Allard, was a major part of the team. I have a scene where I get to crawl around on the ceiling. Well, they had this rig and I was kinda afraid to use it. Well Jeff “Texas Chainsaw Massacre remake” Allard got up in the rig and tested it for me — upside down. That’s fucking cool! Nobody was above anybody else just ‘cause they made bigger movies. Very cool, very laid back set. Very crazy, very weird, very fucked up movie! [laughs] 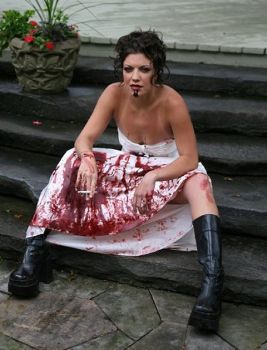 Cannot wait to see that one. You know, based on your work in Bonnie and Clyde vs. Dracula and The Frankenstein Syndrome, I’d come up with a theory that you were kinda moving out of the standard horror genre — blood, guts and nudity — in favor of more character roles that allowed you shine as an actress. Then you make The Violent Kind and screw my theory. Thanks a lot.

[laughs] I had to keep you on your toes!

But, really, do you make an effort to mix it up? Or do you just grab what looks cool?

Obviously, if something is different, like playing Bonnie or playing a doctor in The Frankenstein Syndrome, there is no way I could turn that down. But honestly, I just like to have fun on my movies. I want to always enjoy my job — and if I do too much of the same thing, I’m afraid I’ll start to hate it. Sadly, in the indie horror world there is not always a great range of female characters to choose from. That’s why I’m thrilled to be getting old. Finally I can stop being the prison babe and can be the warden! [laughs]

That’s a good way to look at aging — as a promotion! Speaking of which, you’ve produced and you’ve acted. But you haven’t directed…yet. I seem to remember a little project with Rolfe Kanefsky called The Devil’s Pies. It was to be your debut as a director. Is that dead?

Um, I think it’s kinda dead at the moment. It’s hard to get these movies off the ground now. We had all the elements — cast, crew, locations, a fun script — but like all productions, [we] did not have the money. So one day, when Rolfe wins the lotto or I win the Publishers Clearing House sweepstakes, we may make it. Unless anybody out there loves me or Rolfe Kanefsky that much and is dying to see The Devil’s Pies. Paypal me 50,000 U.S. dollars or deliver it in a black briefcase behind the schoolhouse at dawn and we’ll start tomorrow. 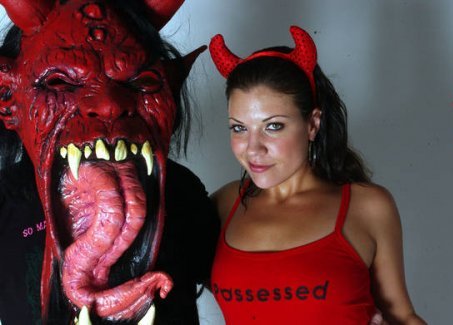 No questions asked. Hear that, fans? It’s in your hands now. You’ve made so many movies, Tiffany. You work all the freaking time, and you’ve seen a lot over the years — I think you now qualify as a showbiz survivor. At this point, how do you not see each new movie as just “long hours and bad food”? What keeps you motivated?

I see most movies as long hours, bad food and stupid people — but isn’t that how it is with every job? I certainly have my moments of whiny tiredness where I call my husband, like, “I’m quitting the industry; I hate these people.” Then I look around and have to slap myself. I make horror films for a living. Nothing is cooler than that. [laughs] Well, maybe if I made more successful ones. [sighs]

However, I did almost walk off a set a few weeks ago. I didn’t, but I almost did ‘cause the director looked like he had SARS, flu and Hep C rolled in one giant human package.

I swear, the air was thick with disease. I thought I could smell his organs shutting down.

Thankfully I didn’t have to leave — he did, and second unit took over for the day. He’s fine now; he didn’t die, but yeah, kinda wanted to bail on that one.

See? A trouper. Okay, last question. You kinda snuck into the industry with Troma when you were a kid. Now, here it is 15 years later. Did you think when you began that you’d still be at it after almost 20 years?

I don’t know. I just fell in to making movies [and] I never really thought much about the future of it. Damn, maybe I should have. I might have chosen better projects. [laughs] I just thought, “Man, this is cool and I get paid!” So no, I think I just took it day by day. Still do, actually. You never know, I may quit tomorrow and become an ovary whisperer or something.

Well, you could not quit and do that as a hobby! Okay, that’s it. Thanks, Tiff.

Thanks, dude. Give Heidi a slap on the ass from me and my indie-horror-power-couple-half husband.

This article was posted in Interviews and tagged Bonnie and Clyde vs. Dracula, Heidi Martinuzzi, Interviews, Jenn Friend, Rolfe Kanefsky, Sean Tretta, Slammed & Damned, The Butcher Brothers, The Devil's Pies, The Frankenstein Syndrome, The Violent Kind, Theron Neel, Tiffany Shepis, Timothy Friend, Trent Haaga, Troma, Tromeo and Juliet. Bookmark the permalink. Follow comments with the RSS feed for this post.Trackbacks are closed, but you can Post a Comment.