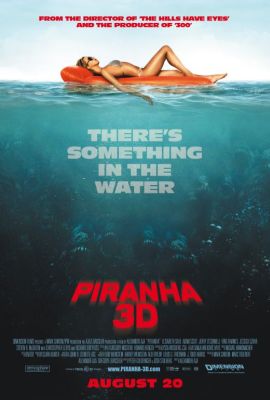 Leave it to a Frenchman to bring back the fun back to the exploitation film, a much loved indigenous American art form that’s grown somewhat antiseptic in recent years. But “bring back the fun” is exactly what director Alexandre Aja has done with Piranha 3D, his recent remake of Joe Dante’s classic 1978 Jaws parody.

Dante’s flick is perhaps the best B movie ever made. It has a little bit of everything — humor, suspense, cunning, gore. Hell, it even had a decent story. Produced by Roger Corman and written by smartypants indie filmmaker John Sayles, the original Piranha was part campy thrill ride, part ecological warning and part anti-war screed. With his reboot, Aja decided to pare that equation down and focus on one part: campy thrill ride, with an accent on the “thrill.” He made the right decision, because Aja’s Piranha 3D is the most mindless fun I’ve had with a movie in a long time.

Piranha 3D sets the tone right away with its opening scene. A lone, bespectacled fisherman wearing a familiar little wool cap sits in his little boat, fishing quietly in Arizona’s Lake Victoria. As the camera pulls closer, we see that it’s Richard Dreyfuss, unofficially and gleefully reprising his role as Hooper from Jaws. When an earthquake suddenly hits, the bottom of the lake splits open, releasing a massive school of prehistoric piranha and causing a whirlpool that sucks Dreyfuss down to a painfully toothy death.

Lake Victoria is the yearly local destination of thousands of horny teens on Spring Break, and this season Sheriff Julie Forester (Elisabeth Shue) and Deputy Fallon (Ving Rhames) are dealing with a larger, rowdier crowd than usual as well as a missing Richard Dreyfuss. Sheriff Forester’s headaches are exacerbated by the appearance of Derrick Jones (Jerry O’Connell), a predatory cokehead pornographer meant to (unofficially) evoke Joe Francis of Girls Gone Wild infamy. The sheriff’s teen son, Jake (Steven R. McQueen), is recruited aboard Jones’ boat to act as tour guide. He’s joined by love interest Kelly (Jessica Szohr) and, to make it a lot more titillating, sexpots Crystal (Riley Steele) and Danni (Kelly Brook), who has a heart of gold and a body of platinum that is leeringly displayed at every available opportunity.

Meanwhile, a team of diving seismologists (really), led by Novak (Adam Scott), have hit town to investigate the recent earthquakes. Novak’s team is soon made a quick lunch, but he does end up with a sample piranha to take to the local retired marine biologist (really), Carl Goodman (Christopher Lloyd, chewing up the scenery like the titular fish). Goodman wastes no time revealing that this species of piranha has been extinct for millions of years, surviving only by becoming cannibals — with the cavern that the fish were trapped in serving as a gladiatorial arena which only the most brutal, deadly piranhas can survive (really). 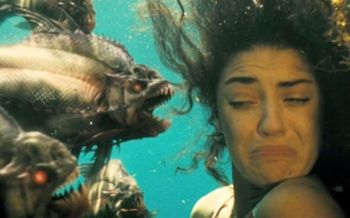 I haven’t loved all of Aja’s previous work, but I have to say, the guy can shoot a movie. The script for Piranha 3D, by Josh Stolberg and Pete Goldfinger, manages to balance all the creative kills and competing storylines nicely, but it’s to Aja’s credit that everything flows as well as it does. With his choice of shots and angles, he brings just enough of the art house to make this a “film,” but never loses sight of the fact that he’s making a fast-moving popcorn flick. This being a 3D movie, there are several distracting “in your face” moments that, when viewed on a standard television, lose any value they might have had in the theater, but that’s okay. If any film can be forgiven for its campy 3D effects shots, it’s this one.

You probably know that I’m an exploitation film buff. If a flick is campy, lurid or just plain wrong, I’m probably going to rave about it. But there’s more to Piranha 3D than gruesome shocks or gratuitous nudity — though, make no mistake, there’s plenty of both. There’s also a reasonably clever, quite entertaining guilty pleasure here that knows exactly what it is, and yet manages to be a little bit more. And if you think about it, there’s something rather special about that.