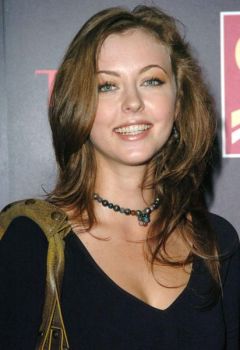 It’s time for the big reveal, my friends. As promised, embedded below is Jen and Sylvia Soska’s new PSA for the Massive Blood Drive. And embedded within this video is the actress they’ve chosen to star in American Mary, their sure-to-be-shocking follow-up to last year’s absolutely-was-shocking Dead Hooker in a Trunk.

After a grueling search that took them from the hills of Hollywood to the canyons of Manhattan, the Twisted Twins finally discovered their Mary in their very own backyard. I’m excited to announce that talented Canadian actress Katharine Isabelle is the woman who will bring American Mary to life.

While I’m sure you all remember Isabelle from the 2000 film Ginger Snaps, you probably don’t realize that she’s more than a scream queen. In the years since that classic slice of Canadian horror was released, Isabelle has established a solid career as a well-rounded, hard-working character actress. But this is not a surprise considering she’s been acting almost her entire life.

Isabelle’s screen debut was in the Joel Schumacher-directed Cousins, where she worked alongside Ted Danson and Isabella Rossellini — not bad for an 8-year-old. She followed that auspicious start with nonstop film and television work, both in America and Canada. Before she was 10, she had already acted with Martin Sheen, William Petersen, Charles Bronson, Ed Asner, Glenn Close and James Woods. Since then, Isabelle has worked constantly, racking up a stunning 84 credits on her IMDb page.

But it is in John Fawcett’s revisionist werewolf tale Ginger Snaps that Isabelle found the role of a lifetime. As Ginger, a rebellious teen girl with the most horrible menstrual disorder possible, Isabelle got the chance to show what she could really do. At turns scary, sexy, smart and touching, Isabelle’s Ginger is a little girl lost who unexpectedly finds herself by embracing the beast within.

When I spoke to the Soskas about Isabelle’s casting, Jen said, “We just felt it from the moment [Katharine] walked in when we met for dinner. She will be playing a very mature, grown-up role. I really feel this film will make a lot of people see Katie in a very new light, and it will be what the people who already know and love her want to see her do.”

American Mary is an important movie for the Soskas. They’re coming off one of the strongest debuts in recent memory, which creates a lot of pressure. It would have been easy to rush and cast an actress that was just “good enough” to allow production to start. The process was often stressful, but it paid off. I’m happy the Soskas took their time finding the right person, because their Mary Mason is a fairly complex role.

“The film rests very much on our Mary,” said Jen. “She has this incredible depth, strength, intelligence and sexuality. We went through so many actresses looking for Mary. With Katie, it felt just right. Like coming home.”

Now, here’s a look at Katie Isabelle’s first appearance in a Twisted Twins production. With this year’s PSA, the Soska sisters have gone a different way than last year’s delightful exercise in gore. This time, with able assistance from CJ Wallis, they’ve mounted a full-fledged musical production (featuring Shannon Lark, Tara Cardinal, Maude Michaud, Brenda and Elisabeth Fies, Amy Lynn Best, Marichelle Daywalt, Jennifer Cooper and Sierra Pitkin) set to a song by The Scarlet Ending. Don’t worry, it’s still a twisted, bloody good time. But it serves a bigger purpose than mere entertainment. Remember, donating blood is important. It truly does save lives. You have to give but a little to do a lot of good. As Katie says in the following clip, “Blood — it’s in you to give.”