Is it Tiffany and Debbie Gibson? No it’s—Mega Python vs. Gatoroid 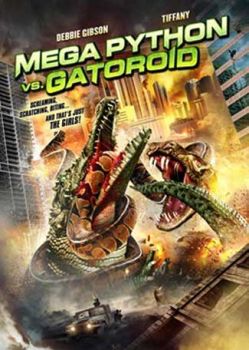 The fine folks running The Asylum have done it again. Purveyor of mockbusters and Syfy mega-features such as Mega Shark Versus Giant Octopus, Mega Piranha and, of course, Mega Shark Versus Crocosaurus, The Asylum has now delivered unto us Mega Python vs. Gatoroid, and it’s safe to say that this low-budget delight delivers everything you might desire from a film bearing such a title.

Although the flick’s big battle is ostensibly between the titular creatures, in truth the main event features ’80s pop tarts Tiffany and Debbie Gibson playing strong women at odds who, by movie’s end, are united in more ways than one by a common mega-enemy.

Gibson stars as Nikki, a fervent animal rights activist whose zeal borders on the sociopathic. Tiffany plays Terry, a park ranger whose beat is the Florida Everglades. When Nikki releases some illegally imported exotic snakes into the swamps, they breed and grow shockingly large. It’s not long until the local gator population is being literally eaten alive, as is Ranger Terry’s fiancé. Mad with grief, Terry decides the only logical step is to ply the gators with super-steroids to create, yes, gatoroids. When, during a musical montage, the snakes feed on the gatoroids’ eggs, the reptiles evolve into, yes, mega pythons. Soon, we have a disaster of B-movie proportions.

Before the it’s over, we’ll see former-Monkee Mickey Dolenz eaten alive, a blimp struck from the sky by a mega python, and Debbie Gibson and Tiffany engage in a catfight that begins with them smearing each other’s scantily clad bodies with cake icing and ends with them both soaking wet in a lake, their long legs and heaving décolletage, respectively, glistening in the moonlight. 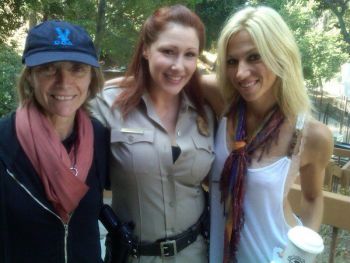 The script by Naomi Selfman allows such events to unfold in as logical a manner as possible and includes gleeful howlers such as “We need a bigger gator,” “Looks like someone had ‘bitch’ for breakfast” and “You gator-baiting bitch!” Indeed, the word “bitch” is uttered often enough that a riotous drinking game could (and should) be built around it.

As for the acting battle between the stars spouting these soon-to-be-classic lines, Gibson and Tiffany are closely matched competitors, though in a split decision I’d have to rule for Tiffany. As cornermen, these warriors have Kathryn Joosten (Desperate Housewives), as the sassy elderly assistant ranger, and the venerable A Martinez playing Dr. Diego Ortiz, a herpetologist with a crazy plan that just might work. While it’s a good idea to use veteran performers in any production starring less-experienced actors, it does tend to point out the stars’ shortcomings. As Dr. Ortiz, Martinez is so good that he repeatedly outshines those sharing the screen with him — not a complaint, just an observation.

The force driving this enjoyable exercise in what Syfy president Dave Howe calls “fun and easy Saturday night, put-your-feet-up, don’t-think-too-much” filmmaking is surely Mary Lambert, the respected director who has given us enjoyable horror fare such as Pet Semetary, The In Crowd and The Attic. Lambert keeps things hopping along nicely here and keeps a straight face as she ably walks the tenuous line between “laugh at” and “laugh with.” Mega Python vs. Gatoroid is pretty high-class as Asylum projects go, and Lambert’s main task was to deliver something watchable, on time and on budget, which she did handily.

So, if you’re a fan of old Roger Corman movies, campy horror flicks or any creature feature with “mega” or “vs.” in the title, you’ll find something to like in Mega Python vs. Gatoroid. No, it’s not high art, but if you play a certain above-mentioned drinking game while watching it, there’s a good chance you’ll think it is. (Hic)