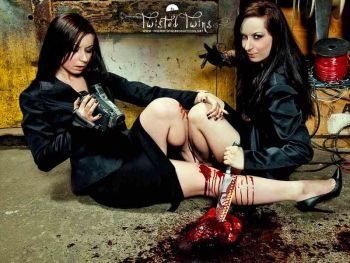 As we all know, it’s time for Women in Horror Recognition Month. And two very special women in horror have a very special announcement to make.

Those crazy Canadians lovingly known as the Twisted Twins — Jen and Sylvia Soska, on their birth certificates — are releasing another PSA for their favorite cause, the Massive Blood Drive. Their first PSA was so awesome and beloved by all that the twins decided it had to be topped. And from what they told me, it absolutely has been.

While I’ve been sworn to secrecy under threat of torture, I dare to divulge a few details. The new PSA, which Sylvia promises is “. . . definitely a big step up in production from last year,” will be released on February 1, at 12:11 p.m. PST, and it will feature, according to Jen, some “special guest stars performing . . . and one very special guest.” Who is this very special guest, you may ask?

As you might remember, the Soskas are beginning production of American Mary, their mysterious follow-up to the wicked cool exploitation classic Dead Hooker in a Trunk. Well, I’m pleased to reveal that, after an arduous search, the ladies have finally found their American Mary. Yes, the very special guest will be the actress they’ve chosen to star in their next feature. 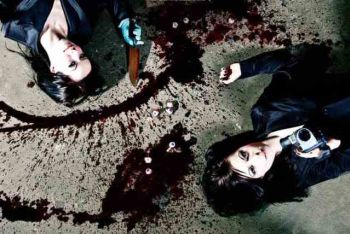 Now, I can’t speak her name, but I can tell you that the woman they’ve cast is a wonderful actress you’ve enjoyed in the past. Wait, maybe you can guess. That would be fair, right? Here’s a hint from Jen. The actress chosen “has the acting chops, the striking beauty, the ability to hold her own against our other top-notch talent . . . and the strength, intelligence and balls to pull it off.” Any guesses?

I think they’ve cast the right person in the role. And I agree with Jen, who colorfully told me, “this very talented actress playing our title role . . . is sure to drive the horror community bat shit crazy.” Sylvie added, “It worked out perfectly. The title role is pretty important so we were worried about finding the ‘right girl’. [This actress] is without a doubt that girl. She is going to be a great Mary.”

Check back here on February 1 to check out the new public service announcement and learn the identity of the Twisted Twins’ American Mary. Until then, I leave you with last year’s PSA. I think you’ll agree they have a ways to go to top this. But I’m not worried; these ladies can do anything.

This article was posted in Updates & Teasers! and tagged American Mary, Dead Hooker in a Trunk, Jen and Sylvia Soska, Slammed & Damned, Theron Neel, Twisted Twins, Updates & Teasers, Women in Horror Recognition Month. Bookmark the permalink. Follow comments with the RSS feed for this post.Trackbacks are closed, but you can Post a Comment.