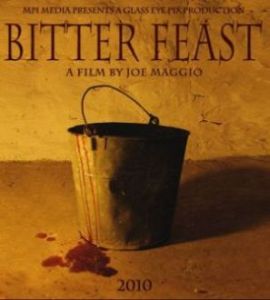 It’s been a long time coming, but there’s finally a horror movie for all you foodies out there. Bitter Feast, a delectable tale of terror from director Joe Maggio, is a smart, stylish flick that might easily be confused for that hip indie film playing down at the local art house — if it wasn’t, you know, for all the torture.

Peter Gray (James LeGros) is a minor celebrity chef whose arrogance has been playing havoc with the ratings of his cable cooking show. He seems to think his audience wants to be educated rather than entertained, and his pompous posturing is dimming his once bright future. A scathing review from malicious, tastemaking food blogger J.T. Franks (Joshua Leonard) is the last straw. Gray snaps and kidnaps Franks, forcing him to participate in an escalating series of cooking challenges that will determine the hateful blogger’s fate.

Maggio is a resourceful filmmaker. The film he’s delivered is gorgeous, especially considering its tight production time and low budget. Coming from the world of micro-budgets, he invests time in rehearsal and preproduction and it shows. Each shot is beautifully composed, with austere frames bathed in cool, muted tones. More important, he knows how to create a sense of reality, which is so important in a horror flick. With his locations and scene choices, he anchors the film with authenticity before he ramps up the violence. His actors deserve a lot of the credit as well. 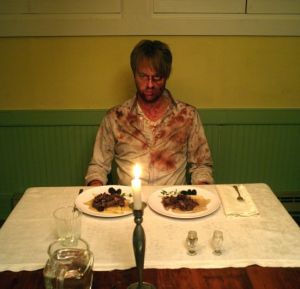 LeGros and Leonard are quite good here, playing similar types. Both characters are total asses, but for different reasons. In a painful bit of exposition that feels wedged into the movie, we learn that blogger Franks’ son died and he’s taking his pain out on the world through his spiteful reviews. Chef Gray’s psychological trauma is bit more integral to the film’s architecture, so I won’t reveal it. But it can be said that these men are more alike than different. Amy Seimetz takes the thankless role of Franks’ wife Katherine and shines. As the film’s big bad, LeGros gets most of the screen time and modulates his performance well, going from repressed anger and wounded pride to crazed killer as believably as possible.

One of the few problems with Bitter Feast is its pacing. It starts brightly, proceeds deliberately and seems to slow until Larry Fessenden appears about halfway through and brightens things up with his turn as a nosy private detective. Surprisingly, the chain of tortuous challenges Franks endures begins to drag the film down, which is troublesome. Unlike the elaborate Rube Goldberg-esque devices of the Saw movies, the tests in Bitter Feast involve tasks as straightforward as cooking a perfect egg or steak. These ordeals’ simplicity is clever at first, but their lack of inherent drama takes its toll as the movie progresses. At almost two hours, the whole thing feels a little long and I couldn’t help but feel a little judicious editing would’ve gone a long way.