Fear and Loathing on the Convention Floor—CES 2011 (pt.1)

But I am a huge fan of spectacle and intensely interested in popular culture. Measured in these terms, CES is the perfect event for me to attend. This event began big and has grown exponentially since. Over the years, CES has become a pop culture phenomenon rivaled only by that other corporate-sanctioned snake pit, Comic-Con.

CES started in 1967 as a spinoff of the Chicago Music Show. Beginning in 1978, CES was held twice a year: a winter show in Las Vegas and a summer show in Chicago. But the winter show became so popular, the summer show was eventually canceled. Let’s face it, where would you rather convene? Chicago has its charms to be sure, but Vegas is an adult playground practically tailor-made made for conventions and their habitués. 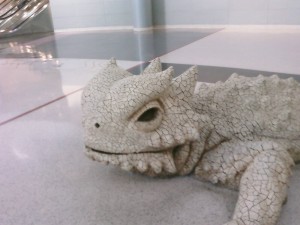 I arrived in Vegas on Thursday afternoon, already tired. My flight was delayed twice before takeoff, which left me wandering the airport most of the day. I hadn’t slept the night before due the unexpected anticipation of what lay before me. It shouldn’t have been unexpected because I’ve always been this way. When taking cross-country family car trips as a kid, I’d be up the night before we left, excited about the extant possibilities. Once on the road, I couldn’t nap (still can’t), because what if I missed something? As a child, this served me well. As a middle-aged man, not so much.

The Vegas airport, McCarran International, seemed small, but it bustled. I’d never been to the City of Sin before, but I’ve long been regaled with tales of airport casinos. “You can gamble. In the airport!” Sure enough, right outside my gate laid a glassed-in expanse of shiny slot machines. I made my way past several other opportunities for loss before finding the taxi line, which was intimidating in length and writhed like a live wire. But it moved surprisingly quickly and I found myself in the hotel lobby within the hour.

That evening was spent getting a feel of the Vegas pulse. The casinos on the strip were packed with middle management, housewives, rent girls and lifers — a Tom Waits song made flesh. I drifted for a while, half-lit and smelling of smoke, before trading this living cinema for my room. After all, I had to be up soon and there were consumer electronic wonders to regard.

This article was posted in Other Awesome Stuff and tagged CES 2011, Chicago Music Show, Comic-Con, Consumer Electronics Association, International Consumer Electronics Show, Las Vegas, Other Awesome Stuff, Slammed & Damned, Theron Neel, Tom Waits. Bookmark the permalink. Follow comments with the RSS feed for this post.Trackbacks are closed, but you can Post a Comment.