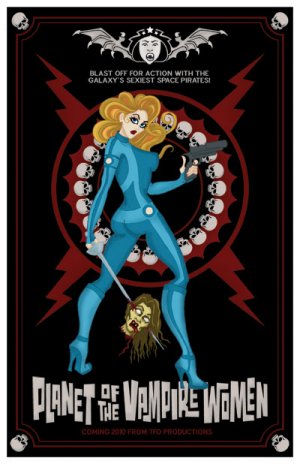 When I spoke to producer Christy Savage earlier in the week, she said, “We are hoping to raise an additional $4,500 to offset the costs of post-production and DVD mastering. All donations and sponsorship funds will go toward additional sound recording, computer-generated special effects, mastering, rendering and DVD screener duplication costs.

“Of course, we are badass and will make it work regardless, but the more money we get, the better. And Theron! You are going to be blown away when you see our CG stuff. I feel I can safely say that no one else is doing this shit on $25,000 budgets.”

Based on the trailer embedded below and TFO’s past films, I believe her. I’ve interviewed Darin, Christy and Amy, as well as several members of the cast, and these are all passionate, talented true believers who are committed to their art.

Don’t forget — for your support, you’ll get more than that warm glow which comes from doing good and lending a hand. There are all kinds of perks for those who donate. You can receive everything from signed posters and DVDs to premiere tickets and actual associate producer credits. Go check out the Planet of the Vampire Women page at Indie-GoGo for all the details. Donations start at only $10 and every little bit helps.