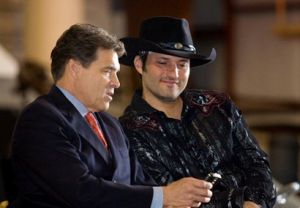 The Texas Film Commission has denied state tax incentives owed to Robert Rodriguez’s Troublemaker Studios for the production of Machete, his semi-controversial film that’s sure to be a lot more controversial now.

The Austin American-Statesman has reported that in a letter released by a spokesperson for Gov. Rick Perry, the Texas Film Commission cited “inappropriate content or content that portrays Texas or Texans in a negative fashion” as reason for the denial of the estimated $1.75 million owed.

This probably feels like a particularly personal betrayal to Rodriguez — when Gov. Perry signed the legislation to increase the same Texas filmmaking incentives that Rodriguez is now being denied, he did so at Troublemaker Studios with Rodriguez standing by his side.

While the Texas Film Commission has not explained its decision, it’s believed to be tied to the furor surrounding the recent immigration debates in Texas. Machete producer Elizabeth Avellán has said, “There’s always going to be a bad guy, and he’s going to be from somewhere. It just so happens in this case the bad guy is a guy from Mexico who is in cahoots with a guy from Texas. The way Texas is portrayed is not bad at all; it’s actually kind of fun . . . Without incentives, it’s really impossible nowadays [to shoot a film in Texas] considering someone else a couple of states away is throwing money at you.”

Texas has really shot itself in the foot this time. The state acts as if it wants to be taken seriously as a major film hub, calling itself the Third Coast, and had seemed to be trying to increase the amount of movie and television projects being filmed in Texas. In September, Gov. Perry’s office proposed $9 million in cuts in film and television incentives for the 2011 state budget. But now, the state has gone and pissed off (and pissed on) a native son — one that just happens to be one of the most productive filmmakers it has.

So, the Man has struck back at Machete. It makes me wonder if Gov. Perry actually saw Machete. If he had, surely he would think twice before making such a move. I suppose he’s covered his tracks. I mean, he didn’t deny the incentive — the Texas Film Commission did. But when all’s said and done, it’s politics as usual. And politics is the dirtiest game of all.

It’s been reported that the sequel to Machete has already been written. If it now actually manages to get made, I wonder if there will be a quick rewrite. Perhaps the villain can be a certain unctuous Republican governor that uses Machete for political gain and then stabs him in the back. Of course, Machete will rise again. And this time…it’s personal.

This article was posted in Other Awesome Stuff and tagged Austin American-Statesman, Elizabeth Avellán, Gov. Rick Perry, Machete, Other Awesome Stuff, Robert Rodriguez, Slammed & Damned, Texas, Texas Film Commission, Theron Neel, Troublemaker Studios. Bookmark the permalink. Follow comments with the RSS feed for this post.Trackbacks are closed, but you can Post a Comment.