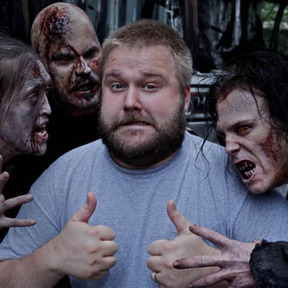 Robert Kirkman, executive producer of The Walking Dead television series and writer of the comic book on which it’s based, has now added the job of firefighter to his resume by performing damage control concerning the news that Frank Darabont has sacked the entire writing staff of The Walking Dead.

Kirkman recently spoke to TVGuide.com about shakeup on the AMC zombie series. “It’s kind of unfortunate that it’s being reported that our writing staff has been fired, because that’s not the case,” Kirkman said. “It makes Frank look bad. I don’t think Frank wants it out there that he’s just firing people off of a successful show seemingly for no reason.”

Umm, I sure he doesn’t. It seems Kirkman has managed to keep his gig, though, saying he’s excited to continue working with Darabont. Regarding the report that among the fired was Charles “Chic” Eglee, Darabont’s right-hand man, Kirkman said, “Chic Eglee is a high-level television writer. He was brought onto The Walking Dead with the idea that Frank was going to work on the first season and then go off and do movies . . . Chic didn’t want to be second-in-command on a show when he’s used to being a top dog, and so he decided to go off and do something else, which is something that happens and is not a big deal.”

As for how next season’s writing will be handled, Kirkman said, “It’s a little premature to be nailing down. I don’t know if it’s going to be a freelance situation or if we’re going to have writers in a writers’ room . . . That’s something that’s being worked on now.”

While it’s sweet of Kirkman to step up and try to put out this fire, all he’s really doing is confirming the belief that Darabont is a micromanaging one-man band—not that there’s anything wrong with that. Methinks Mr. Kirkman should keep his day job…if he can.

This article was posted in Updates & Teasers! and tagged AMC, Charles "Chic" Eglee, comic book, Frank Darabont, Robert Kirkman, Slammed & Damned, The Walking Dead, Theron Neel, Updates & Teasers, zombie. Bookmark the permalink. Follow comments with the RSS feed for this post.Trackbacks are closed, but you can Post a Comment.