Machete to Hack His Way Back 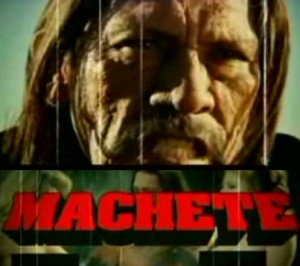 Machete might not text, but apparently he does sequel. According to Machete star and professional badass Danny Trejo, director Robert Rodriguez has written the next chapter of the Machete mythos. On a related note, the Man is already cowering and ERs are now preparing for the influx of mutilated minions Machete’s rampaging return will almost certainly generate.

When asked recently about the ex-Federale turned folk hero’s chances for return, Trejo remarked, “I asked [Rodriguez] when he was going to write it and he says it’s written . . . so we can get started pretty quick.”

Plot details have not been announced, but I envision something along the lines of the following:

Machete, living off the grid in rural Mexico, is contacted by his former boss, with whom he has always had an antagonistic relationship. This unnamed man (played by Harrison Ford) begs Machete to locate his dead brother’s rebellious daughter, who he believes has been sold into white slavery by a ruthless criminal mastermind (played by Mel Gibson). Machete takes the case, not because he cares, but because it’s the Right Thing To Do. Along the way, Machete will satisfy a sheik’s harem and decimate an opium den full of ninjas. Before it ends, Machete and Harrison Ford develop a begrudging respect for each other and the rebellious daughter, who has lost an eye in the ensuing chaos, begins training as Machete’s totally platonic protégé. Oh, and something about a precocious street urchin who attaches himself to Machete along the way.

Rodriguez has said he would like to make to sequels titled Machete Kills and Machete Kills Again. I’d definitely love to see those, but what I really want for Christmas is Machete in Space.