The Walking Dead Slows to a Crawl 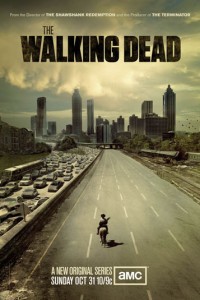 The zombies on AMC’s series The Walking Dead may be walking a little slower than usual for a few months. Entertainment website Deadline Hollywood is reporting that writer/director/executive producer and all-around head honcho Frank Darabont has fired the entire writing staff for the hit show, which premiered last October.

It appears the house-cleaning, which even included Darabont’s right-hand man, executive producer/writer Charles “Chic” Eglee, is the first (shambling) step toward the implementation of a new production model that relies on freelancers rather than a traditional writing staff. This is a common practice in England on BBC-produced programs, but here in America (where we stopped doing things the British way quite a while ago) this is a radical departure—one that the Writer’s Guild of America might well take issue with…and you don’t want to piss off the WGA, my friends. (Pssst, Frank Darabont, you think your show is crawling along now? Wait till the WGA throws down one of its patented strikes. The last one stretched to 100 days and disrupted film and television production in Biblical proportions. True, the WGA will probably only send you a strongly worded letter, but just watch it, buddy. Don’t give’em any excuses. You’re on their radar now.)

Whatever the end result, the parties involved better get crackin’. The upcoming second season of The Walking Dead has been expanded to 13 episodes, more than double the first season. The plan is to premiere the second series (Brit-speak for “season”) in October, which sounds like plenty of time. But there’s that nasty preproduction process to contend with—and before that can commence, scripts need to be written by someone. Ahem. Consider this my application, Mr. Darabont, sir.

Now, for something completely different, a wonderful little video about being a writer.

This article was posted in Updates & Teasers! and tagged AMC, BBC, Charles "Chic" Eglee, Deadline Hollywood, Frank Darabont, Slammed & Damned, The Walking Dead, Theron Neel, Updates & Teasers, WGA, writers, zombies. Bookmark the permalink. Follow comments with the RSS feed for this post.Trackbacks are closed, but you can Post a Comment.