Leslie Nielsen—Gone but ever hilarious

F. Scott Fitzgerald famously said, “There are no second acts in American lives,” but actor Leslie Nielsen might have disagreed with him.

Nielsen died in Fort Lauderdale, Florida, on November 28 from pneumonia. He was 84. Nielsen was best known as the handsome, somber hero and pitiless villain in dramas and thrillers for the first 30 years of his career. Then he took a role in a 1980 disaster movie parody called Airplane! The film became an overnight classic and Nielsen’s career was never the same again.

Leslie William Nielsen was born on February 11, 1926, in Regina, Saskatchewan. His father was a member of the Royal Canadian Mounted Police, and his uncle was actor and humanitarian Jean Hersholt.

Nielsen began his acting career in radio before attending the Academy of Studio Arts in Toronto. He later studied at the Neighborhood Playhouse in New York, which led to a role on the live CBS dramatic anthology series Actor’s Studio in 1950. This being the Golden Age of Television, Nielsen stayed busy with TV until 1956, when he made his film debut in Ransom! with co-stars Glenn Ford and Donna Reed. He followed that with a role in Forbidden Planet, a highlight of his early career and one of the most influential science fiction films of all time.

Over the next two decades, Nielsen worked tirelessly on the big and small screens, becoming one of the most familiar faces in Hollywood. He starred in dramas, westerns, thrillers, romances, war movies, disaster flicks—everything but comedies. Then came Airplane! A slapstick farce full of sight gags, broad humor and off-color jokes, the movie was unlike anything Nielsen had ever done. Little did he know, he was a natural-born comedian. He later described his career-rejuvenating move to comedy as “too good to be true.” 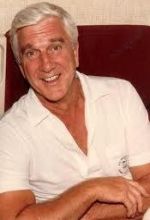 When Airplane! directors Jim Abrahams, David Zucker and Jerry Zucker cast Nielsen as the oblivious Dr. Rumack and gave him the classic comeback line “I am serious. And don’t call me Shirley,” they were mining comedy gold and giving Nielsen, and us, the gift of a lifetime. This one role changed his life and led to Nielsen being dubbed “the Laurence Olivier of spoofs” by film critic Roger Ebert.

Nielsen found his next classic role in Detective Frank Drebin, the character he first played on the TV series Police Squad! before taking him to the big screen in the Naked Gun movies. Other highlights from his comedy years include Dracula: Dead and Loving It, Spy Hard, Repossessed and Scary Movie 4. He’s also fondly remembered by horror fans for his turn as the vengeful husband who get his comeuppance in Creepshow.

Appearing in more than 100 movies and 1,000 television shows, Nielsen once remarked, “Doing nothing is very hard to do . . . you never know when you’re finished . . . I’m afraid if I don’t keep moving, they’re going to catch me.” I think we can all agree that Leslie Nielsen definitely earned some rest. Thankfully, we can still find him whenever we need a laugh.