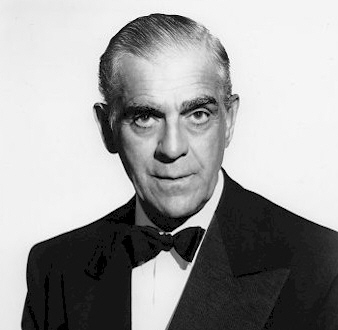 On November 23, 1887, William Henry Pratt was born. What? Oh, you most likely know him as Boris Karloff. Or Karloff the Uncanny. Or Frankenstein’s monster. Or the narrator of How the Grinch Stole Christmas. Or Fu Manchu. Or the Mummy. Heck, I could do this all day, but you get the idea: Boris Karloff was, and always will be, one of the true masters of horror.

From his start as an itinerant actor traveling around Canadian theaters to his golden years as Universal Studios‘ monster of choice, to his final days appearing in low-budget exploitation flicks, one thing remained constant. Karloff was a true professional and one of the nicest men in show business. All he wanted to do was ply his craft. Lucky for us, he found his niche in fright flicks, allowing us forever to enjoy his understated sense of humor and savor that wonderful, singular voice. And the rest, as they say, is history.

One thing he didn’t do is give voice to that 1962 Halloween classic, “Monster Mash.” That particular piece of Americana was performed by Bobby “Boris” Pickett, a singer trying to cash in on the period’s love of wacky dance crazes. Granted, it was a good imitation, but it wasn’t Karloff the Uncanny. Actually, Karloff did perform the song once, in October 1965 on the ABC teen music show Shindig! Sadly, that performance seems to be lost to the sands of time. But leave it to those crazy kids and their inwebternet to try and fill this woeful void.

I found the following clip on YouTube (you may have heard of it). Someone called “godzzla” has reconstructed what that long-lost Shindig! performance might have looked and sounded like. It appears that some of the original video survived, so this is a pretty good recreation. Anyway, in honor of Boris Karloff’s birthday, I present this mash-up of “Monster Mash.” I know it’s not a true reflection of “Karloff: the man, the myth, the legend.” But I like to think he’d get a kick out of it. Happy birthday, Boris!

This article was posted in Other Awesome Stuff and tagged 1962, Bobby "Boris" Pickett, Boris Karloff, Frankenstein's monster, Fu Manchu, Halloween, How the Grinch Stole Christmas, Karloff the Uncanny, monster, Monster Mash, Shindig!, Slammed & Damned, the Mummy, Theron Neel, Universal Studios. Bookmark the permalink. Follow comments with the RSS feed for this post.Trackbacks are closed, but you can Post a Comment.