In the early 1950s, the specter of horror comics cut a significant swath through America’s youth. The lurid nature of these books and the violence and terror they contained were blamed for everything from juvenile delinquency to the spread of Communism. In fact, the popularity of horror comics among kids of the era was a major reason for the 1954 creation of the Comics Code Authority, essentially a comics industry censorship code similar to the Hays Code instituted by Hollywood in 1930. Sadly, this industry-regulated code was largely responsible for the almost total eradication of this grisly genre of comic.

Although EC Comics is the company usually associated with ‘50s horror comic books, it actually produced only a small fraction of the horror comics published at the time. The rest of these gruesomely frightening funny books were created by a variety of smaller companies whose output has been largely forgotten and lost to the sands of time…until now. Thankfully, Fantagraphic Books has come to the rescue by collecting some of the best of these missing tales and issuing them in a gorgeous volume called Four Color Fear: Forgotten Horror Comics of the 1950s. 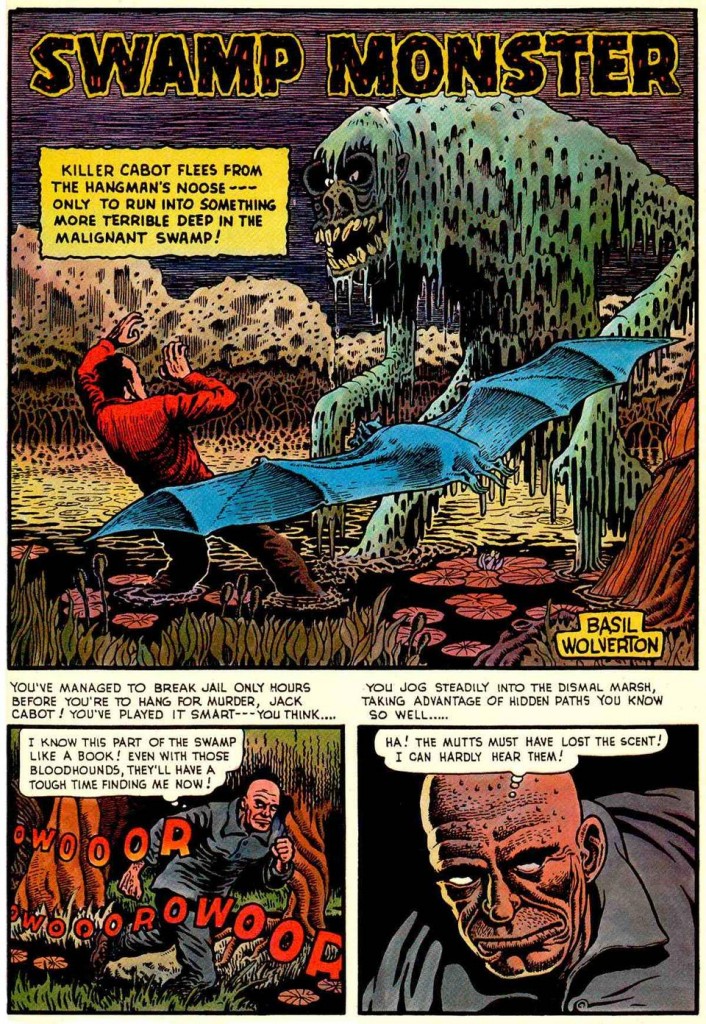 Many of these small production studios and publishers had a factory approach, meaning several different artists and writers would work on each book, and even each story. While this method, and poor recordkeeping, has made it difficult all these years later to know exactly who wrote what, in this volume you’ll find the work of authors like Sid Jacobson, Bob Powell and Ruth Roche. Luckily, better track was kept of the illustrators. In Four Color Fear, there is some delightfully ghastly art from such masters as Basil Wolverton, Joe Kubert, Frank Frazetta, Jack Cole, Wallace Wood and Jack Kirby.

I keep using words like “gruesome,” “lurid” and “grisly” for a reason. The bigger shops—EC, for example—had a slightly more polished look and the tales they told were a tad more refined than what you’ll find in Four Color Fear. The artwork is full of monsters, demons, zombies and grue, all explicitly rendered and garishly colored. Most of the stories contained here are rather outré and just plain wrong. One of my favorites, “Corpses…Coast to Coast!” from Voodoo #14 (March-April 1954), is the bizarre account of an undertaker who dreams of subverting the governments of the world through a zombie revolution. Full of fascist subtext, this tale isn’t disturbing because of the desiccated legions of walking dead, but the crazed zeal of the narrator as he recounts in loving detail his fully formed plans to dominate humanity. The book also has a large collection of stunning glossy covers and period advertisements that, when combined with the rest of the material, make this compilation a must-have.

Sadowski, Benson and Fantagraphics have gone above and beyond to deliver a spectacular array of “weird yarns of unseen terrors,” “stark, terrifying horrors” and “spine-tingling tales of mystery and suspense.” If you’re a fan of horror comics or monster culture in general, you really should check out Four Color Fear: Forgotten Horror Comics of the 1950s. It truly is unforgettable.