A Blood Bath in Dallas—Blood Bath 2: The Film Fest 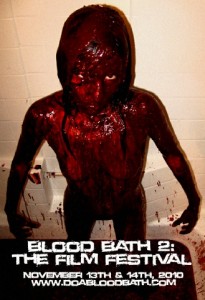 Are you ready for another blood bath? I hope so, because on November 13 and 14, at the Texas Theatre in Dallas, Texas, DOA Blood Bath Entertainment is presenting Blood Bath 2: The Film Festival…and this time, it’s personal. I’m joking, of course. But seriously, this year’s fest is the real deal. If you are a fan of independent horror, you’ll want to be there if at all possible.

This is going to be a big event. The fest is staging the world premiere of two feature films: Kodie, the much-anticipated killer teddy bear flick, and The Super, a movie that will surely scare anyone that enjoys apartment living. There will also be the American premiere of Fell, from director Marcus Koch. Other features showing this weekend include the award winning flicks Walking Distance from Houston’s Mel House, Exhibit A-7 from Adam Minarovich, and Dead Hooker in a Trunk, the cult hit from Canada’s already legendary Jen and Sylvia Soska. But that’s not all, my friends.

There is a full slate of short films as well, including Red and the Wolf, By Her Hand She Draws You Down, Scream Queen and Lip Stick, the notorious self-pleasure flick from Shannon Lark and Stacie Ponder. Also, a selection of shorts from Houston’s recent Splatterfest filmmaking competition will be screened.

This year’s Blood Bath is attracting some exciting, big names too. Debbie Rochon, April Burril, Reggie Bannister, Shannon Lark and Mel House are just a few of the filmmakers that will be in attendance. And if that’s not enough for you, there will be two parties with festival participants in one of Dallas’ coolest clubs, Muddy Waters Bar, featuring live entertainment from some great bands.

The festival will run all day this Saturday and Sunday. Tickets are $7 per feature-length film, $15 per day, or $25 for the weekend. They will available at the door, but you can get them in advance online at the Blood Bath website, where you’ll also find a full schedule of films and guests, as well as trailers of films being screened.

For out-of-town attendees, the official hotel of the festival is the Belmont Hotel, with special room rates starting at $79 and a free shuttle to transport guests from the hotel to the Texas Theatre.

DOA’s  Blood Bath is always a special fest, but Blood Bath 2: The Film Festival is going to be downright historic—it’s being held in the infamous Texas Theatre, which is the location of Lee Harvey Oswald’s arrest following the assassination of JFK. So, not only do you get to see some wonderful indie horror and hobnob with some hip guests, but you also get to do it sitting in one of the darkest corners of American history. Sounds like a good fit to me.