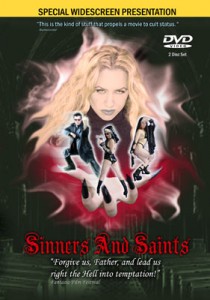 Considering all the obstacles faced in making Sinners and Saints (2004), it’s a wonder it was ever completed.  Filmed off and on over a period of three years, this phantasmagoric horror/kung fu/exploitation hybrid was made on a tiny budget, with everyone involved pitching in to do all they could to get the movie finished.  Whether it was building sets, creating props, making costumes or preparing meals, the small cast and crew pulled it off, working a grueling schedule, and ended up with a film that’s unlike any I’ve seen before.

Starring, co-written and directed by Melantha Blackthorne (better known independent horror world as Countess Bathoria), Sinners and Saints tells the story of Necrotia, the Queen of Hades, and her efforts to quell a rebellion in Hell.  Meanwhile, Father Carmichael Drake (Jason Cavalier) and his partner, Sister Jordan Merrick (Liz Faure), are investigating the disappearances of several local teen girls who seem to have been abducted by a Satanic cult to serve as sacrifices.  Drake and Merrick are kind of like an ecclesiastical Mulder and Scully, by way of Bruce Lee. That’s right, they “kick arse for the Lord,” as Peter Jackson might say.

Father Drake has been having dreams―very bad dreams through which Necrotia has been trying to enlist his help.  It seems the problems in Hell and the kidnapped girls are connected, and Father Drake, for reasons I’ll leave you to discover, is the only man alive that can aid the Queen of Hell in putting down the rebellion and, dare I say it, save the world. 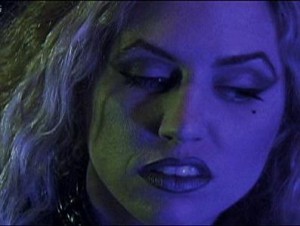 While the low budget of Sinners and Saints shows from time to time, it’s actually not a bad-looking film.  The cinematography is fairly impressive, incorporating many different styles and visual effects. Blackthorne also has given us Vatican satellites in outer space, martial arts wirework, an interesting interpretation of the environs of Hell, not to mention Goth strippers that morph into flesh-eating demons mid lap dance.

As you might guess, the whole affair is filtered through a dark and twisted sense of humor.  And there’s gore aplenty: heads are lopped off, penises are lopped off, arms are lopped off—there’s a whole lotta loppin’ goin’ on, as Jerry Lee Lewis might say.  One scene features an extremely obnoxious severed head whose tongue is not so much lopped off as ripped out.  But it’s all in good fun, as strange as that might seem. 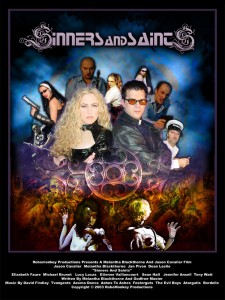 Robomonkey Productions, Blackthorne and Cavalier’s production company, is a shop specializing in horror, exploitation and sci-fi. It’s based in Canada, which, as most serious movie buffs know, has a rich tradition of horror, with films such as Bob Clark’s proto-slasher flick Black Christmas; Jeff Gillen’s Deranged, based on the case of serial killer Ed Gein; and John Fawcett’s Ginger Snaps, a fun, modern take on the werewolf legend.

This article was posted in Reviews and tagged Countess Bathoria, demons, deranged, exploitation, Ginger Snaps, gore, Goth, Melantha Blackthorne, phantasmagoric, Reviews, Robomonkey, Sinners and Saints, Slammed & Damned, slasher, Theron Neel. Bookmark the permalink. Follow comments with the RSS feed for this post.Trackbacks are closed, but you can Post a Comment.