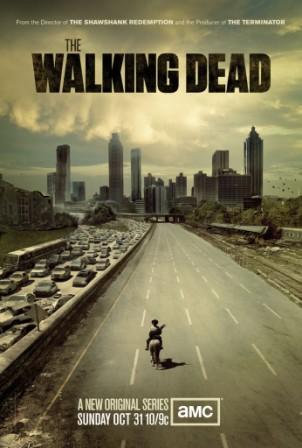 They said it couldn’t be done, but they were wrong. Zombies have finally come to television. That’s right, those flesh-hungry, desiccated ambulatory corpses are very much alive on The Walking Dead, airing Sundays at 10:00 p.m. EST (9:00 p.m. CST) on the basic cable channel AMC.

Based on the comic book written by Robert Kirkman and penciled by Tony Moore and Charlie Adlard, The Walking Dead has made the jump to TV thanks to the efforts of Frank Darabont, the writer and director of The Shawshank Redemption and The Green Mile. Known chiefly as an adapter of Stephen King’s work, Darabont obviously has a horror pedigree, so it’s not that surprising to see him take on zombies. What is surprising—at least, to me—is exactly how great the first episode of The Walking Dead was. Based on the strength of the pilot, his show has already become must-see TV for me, which is unexpected because I’m not a huge zombie fan.

The reason The Walking Dead works is simple. Although it probably seems like a zombie tale, it’s actually a very human story. There’s been criticism on the Internet that the show is slow and too talky, and I guess it might be if you’re only watching to see the living dead rend victims and eat their flesh. All you splatterhounds will be happy to know that AMC is allowing plenty of gore and grue, but the filmmakers are far more interested in the living.

The Walking Dead feels a tad familiar at first, veering somewhat close to 28 Days Later… territory. After being shot, Rick Grimes (Andrew Lincoln), a Kentucky deputy sheriff, wakes up in a deserted hospital that looks like a warzone. As he makes his way home through desolate streets, he discovers what seem to be mutilated walking dead. He soon meets Morgan and Duane Turner (Lennie James and Adrian Kali Turner, respectively), a father and son who confirm his fears—a zombie apocalypse has occurred. Deputy Rick’s first thought is to track down his missing wife and son. We learn that they are safe with his partner, Deputy Shane Walsh (Jon Bernthal), the informal leader of a group of survivors. 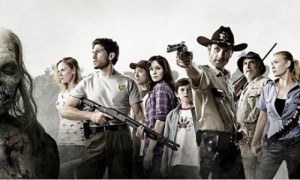 After Grimes escapes the hospital and meets Morgan and his son, The Walking Dead really takes off. One of the reasons this show is so successful is the casting. Though Andrew Lincoln is the lead and fine as such, in the pilot episode Lennie James steals the show. James is riveting and absolutely believable every second he’s onscreen. All the actors are very good, but with the pilot script Darabont wrote, they have excellent material to work with. Any decent actor will tell you that’s half the battle.

I’m happy AMC is letting the filmmakers do what they want. By the way, I keep saying “filmmakers” because, although this is a TV show, it really feels like a movie. Darabont is shooting on 16mm, which allows a little film grain to show. The result is a beautiful, lush look that’s part feature film, part grindhouse flick. Admittedly, the copious amounts of gore and unflinching deaths help to fuel the last part of that comparison.

At first glance, The Walking Dead might seem a strange choice for AMC. Truth be told, it’s of a piece with rest of the network’s original programming. Much like the early 1960s in Mad Men and meth dealing in Breaking Bad, zombies are just a backdrop in The Walking Dead. The undead are merely a hook on which to hang a show about people and relationships. I’m glad AMC was able to see this show for what it really is: a compelling human drama, featuring a talented ensemble cast. Sure, there’s plenty of walking dead, but it’s the living that will keep us watching.

I’ve read the first two trade paperbacks of the source material, but it’s been a while. From what I remember, Darabont and company have hewed exceptionally close to the books, but they are bound to stray somewhat eventually. Whatever they plan on doing, I hope they can keep it up for at least a few seasons. The Walking Dead looks like it will be a wonderful show as long as AMC chooses to keep it alive.