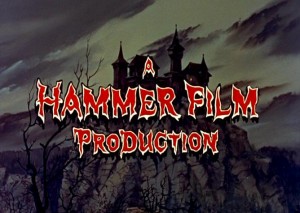 Today, we’re going to take a break from Universal Studios horror to hop the pond for a visit with Universal’s spiritual (or should I say “infernal”) cousin in terror, Hammer Films.

All month long, it’s been “Hammer Horror” night every Friday on TCM. Sadly, tonight is the final group of films—but it’s a really good group! This evening [Oct. 29, 2010], starting at 8:00 p.m. EST (7:00 p.m. CST), it’s “All Frankenstein, All Night!” That’s right, TCM is running four of Hammer’s Frankenstein flicks in a row, all of which were directed by gothic horror auteur Terence Fisher, who helmed several of Hammer’s best. And, of course, each of tonight’s choices will open and close with a little historical framing from TCM host and film historian Robert Osborne.

First up is The Curse of Frankenstein (1957), the beginning of Hammer’s Frankenstein series. It stars Peter Cushing as Baron Victor von Frankenstein. Christopher Lee co-stars as the Creature. It should be noted that this is also the flick that marked Hammer’s jump from mysteries to horror movies. 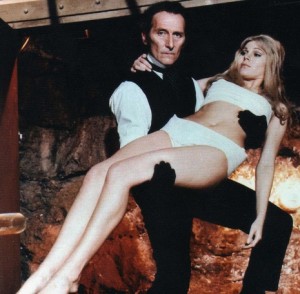 Second, we have The Revenge of Frankenstein (1958), in which Baron Frankenstein evades execution and continues with his ill-advised experiments. But this time, he skips building a monster and instead gives his assistant, Karl the dwarf, a new body. I kid you not. Cushing returns, with Oscar Quitak and Michael Gywnn as Karl the dwarf and New Karl, respectively.

Next, the wonderful Frankenstein Created Woman (1967), in which both Hammer and Cushing’s Baron get metaphysical by transplanting an executed man’s soul into the dead body of the woman he loved. Martin Scorsese has picked this film as one of his favorites, so catch it if you can. I mean, the director of Boxcar Bertha can’t be wrong!

Tonight’s final Frankenstein film is Frankenstein Must Be Destroyed (1969). Cushing again appears as Baron Frankenstein, this time with Freddie Jones as the Creature. This is the flick that turns the story on its head, making the Baron monstrous and the Creature misunderstood.

These aren’t all of Hammer’s Frankenstein films, but these are definitely the best of them. If you’ve never seen them before, tune in and check ‘em out. It’ll be the perfect way to get in the Halloween spirit. And perhaps this will prove, once and for all, that TCM isn’t just for old people. ‘Cause it’s not. No, really!