For the last week or so, Slammed & Damned has been going “Back to Basics,” examining movies from horror’s past to discern what relevance they have in the present. So far, we’ve looked at Dracula and Frankenstein, the first two major films from the golden age of Universal Studios. These movies not only helped form the foundation of modern horror, they also feature two of the most enduring horror icons. Coincidentally, both of these flicks are also based on novels that are classics of the genre. That The Mummy managed to join Dracula and Frankenstein in that vaunted horror hierarchy is something of a mystery, because The Mummy is easily the weakest film of this diabolical trinity of terror.

When all the sand has cleared, I suppose the staying power of The Mummy is most likely explained by the haunting performance of Boris Karloff, who plays Imhotep, a lovelorn ancient Egyptian priest buried alive as punishment for sacrilege. Karloff also plays Ardath Bey, a mysterious modern Egyptian scholar possessing a suspicious amount of hitherto unknown information. Could it be that, in the world of The Mummy, Imhotep and Ardath Bey are the same person as well? But I’m getting ahead of myself.

When head of production Carl Laemmle Jr. was fishing around for another horror movie for Karloff, Universal’s surprise rising star, he found inspiration in King Tut, of all places. Tutankhamen’s tomb had been discovered a decade earlier in 1922 and things Egyptian were still all the rage. With the tale of Tut’s curse alive and well, Carl Junior believed that he’d struck gold. Having had enormous good fortune with fright flicks based on literary source material, and eager to follow that proven successful blueprint, Junior ordered Universal story editor Richard Schayer to dig up a novel on mummies and curses that could be mined for a film.

In his futile search for a suitable book, Schayer stumbled across the story of Count Alessandro di Cagliostro, the notorious 18th-century Italian mystical charlatan. Seeing some promise in this tale, he teamed with author Nina Wilcox Putnam to produce a treatment called Cagliostro. Although Carl Junior liked the basic framework, it was missing the Egyptian hook he desired. So, Junior went back to that beloved blueprint and assigned John L. Balderston, who’d been involved with both Dracula and Frankenstein, to devise a script that combined the rejected treatment with the requested mummies and curses. Balderston dusted off his typewriter, changed Cagliostro to Imhotep and Italy to Egypt, and cranked out a pyramid potboiler that was more than a little familiar.

The Mummy opens in 1921 Egypt with Sir Joseph Whemple, whose archaeological expedition has discovered the mummy of Imhotep and the Scroll of Thoth. Whemple is warned by Professor Muller (Edward Van Sloan), a specialist in occult lore, to destroy the scroll less a curse fall upon all members of the expedition. But, in the name of science, Whemple ignores Muller, which allows Ralph Norton, a young upstart eager to make a name for himself, to translate and read aloud the scroll—which allows the mummy of Imhotep to come alive, steal the scroll and shamble away into the night as mummies tend to do. 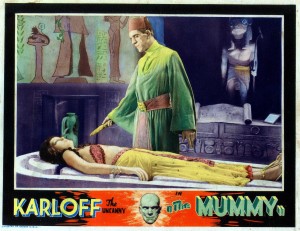 Jump forward a decade to Whemple’s son, Frank (David Manners), who is leading his own Egyptian expedition. Frank has discovered nothing but sand until the weird and withered Ardath Bey (an anagram of “Death by Ra”) comes calling with quite specific directions to the undiscovered tomb of Princess Anck-es-en-Amon. Frank is delighted with the find and becomes famous over night, but Bey disappears. The mummy of the princess and all the buried treasures are enshrined at the Cairo Museum, where Bey soon turns up with the Scroll of Thoth to perform eldritch rituals that awaken the spirit of the long-dead princess, which is currently housed in the body of young socialite Helen Grosvenor (Zita Johann), who has recently fallen in love with Frank Whemple. In another coincidence in a series of striking coincidences, Bey meets Helen and realizes she is the modern incarnation of Princess Anck-es-en-Amon, with whom he was madly in love when, yes, he was known as Imhotep, high priest of the Temple of Karnak. It seems Imhotep was mummified as punishment for stealing the sacred scroll and trying to raise his dead lover from the grave.

Bey then lures Helen to his lair and attempts to convince the princess in her to die and be reborn into her mummified remains, which will allow them to be an ancient Egyptian matched set. Though the princess is tempted, Helen is very much against the idea—so much so that even the princess changes her mind and prays for salvation from the goddess Isis, whose nearby statue shoots a beam of energy at Bey, turning the spurned lover to dust and bringing this sudsy melodrama of the macabre to a close.

If the story of an undead man falling for a young woman sounds a bit similar to another famous Universal horror movie, that’s because it is. When Balderston revised the Cogliostro treatment to write The Mummy, it seems he infused the resulting screenplay with plot points from his stage version of Dracula, thereby creating a true Frankenstein of a script. Several of the scenes in The Mummy are almost identical to those in Dracula, but the connection between the two films didn’t end there. Karl Freund, cinematographer (and rumored co-director) of Dracula, stepped up to make his directing debut on The Mummy. While his trademark roving camera darts around the sensational Egyptian-themed sets, always finding the interesting shot, he’s less successful with his actors. Rumor has it Freund was a tyrant onset, bullying Zita Johann incessantly, and many of the supporting performances are perfunctory at best. Also on board is Universal veteran Edward Van Sloan, who played Dr. Waldman in Frankenstein and Professor Van Helsing in, that’s right, Dracula. Here, as Professor Muller, Minnesota-born Van Sloan ably repeats his characteristic role as the Germanic Voice of Reason. 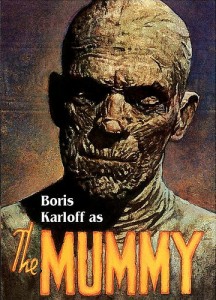 Whereas Van Sloan and Johann both gave capable performances—Johann especially so—the co-star in The Mummy most deserving of attention is the amazing makeup of Jack P. Pierce. Pierce also worked on Dracula, where his main contribution was the widow’s peak toupee he insisted Béla Lugosi sport as Count Dracula. And though Pierce’s work on Frankenstein is the stuff of legend, and rightfully so, the makeup he created for The Mummy was even more intricate than that Karloff wore as Dr. Frankenstein’s creature. Pierce’s mummy makeup required Karloff to have coats of greasepaint, eyebrow pencil, cotton, spirit gum and collodion applied to his face and clay to his hair before he was wrapped in multiple layers of acid-treated linen gauze and then baked beneath a heat lamp. The whole ordeal took eight hours to apply and two hours to remove. Luckily, he only appears in this makeup at the beginning of the flick. The makeup he wore as Ardath Bey took only four hours to apply. Always the good sport, Karloff’s chief complaint about the mummy suit was the lack of a fly, which would’ve been handy considering he was stuck in that costume up to 15 hours at a stretch.

Over the preceding year, Boris Karloff (born William Henry Pratt) had become quite a famous man. His lean days of driving trucks and hustling for decent films were behind him for good thanks to his horror work, but the effect of Universal’s publicity machine cannot be underestimated. In the opening credits of Frankenstein, Karloff was billed as “?” By the time The Mummy was released in 1932, Universal insisted he was “Karloff the Uncanny.” He would soon make the jump to simply “Karloff,” but he never let it go to his head. Karloff was well known as one of the nicest men in Hollywood, probably due to the fact that he spent years paying dues and came to fame later in life. He nabbed his first film role, as an extra, when he was 29 and by the time The Mummy hit, Karloff was 45 years old. 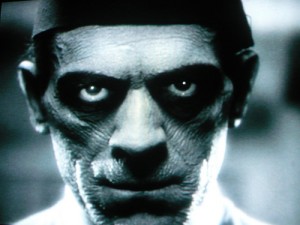 By 1932, the art of cinema had developed quite a bit from the days of silent film. Technology and technique had developed exponentially. Where the filmmaking of Dracula felt closer to a silent movie and Frankenstein illustrated talkies were finding their feet, The Mummy was a huge leap to modernity. The growing possibilities of the medium were being explored through the use of big sets and varied methods of storytelling, such as title cards and flashbacks. Interestingly, the flashes to ancient Egypt are told in the language of silent film, with jerky, mute images and exaggerated acting, indicating that even a few years removed, the original film language was considered archaic.

Although most of the old Universal Studios films can feel antiquated in this era of CGI blockbusters, they continue to be relevant because, like any good horror film, they are about more than the monster. Both Dracula and Frankenstein can be seen as parables to some degree. Maybe this is why, today, The Mummy is the least interesting of the Big Three. There’s not much here beyond a somewhat jumbled love story spanning the ages. I suppose Helen’s plight could be seen as addressing the duality of the modern woman, forced to choose between past and contemporary mores—but that’s a stretch. Maybe The Mummy disappoints because it’s the first of the major horror flicks without literary source material, but I doubt it. Both Frankenstein and Dracula were adapted from stage plays that had already altered the stories significantly and the resultant films made no effort to restore them in any way. Besides, The Mummy is essentially “Dracula in Egypt” and it still manages to falter where Dracula succeeded. No, I think the issue is more basic than subtext or source. Any film that calls itself The Mummy really needs to focus on, ummm…the mummy! 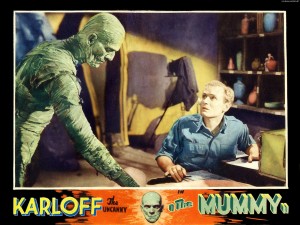 While later mummy movies from both Universal and Hammer Films contain a lot of our creepy bandaged buddy wandering the countryside with a helpless female in his arms, his debut appearance consists of only one scene, and even then he’s barely glimpsed. Granted, in the context of the story, it’s quite an effective cameo. But it’s still a cameo. Karloff has plenty of screen time and is superb as Ardath Bey—who is (technically) the mummy—but it’s all a bit misleading. Obviously, Universal knew what worked. Even the film’s original advertising pushed the mummy’s image.

Whatever its flaws, The Mummy worked well enough to entomb itself into the lingua franca of horror. The creature originated by Karloff has survived to become a major horror icon whose influence can be felt in the slasher flicks of today—the archetype of the slow-moving killer who is somehow always right behind his victim is easily traced to later iterations of this particular monster. Actually, that’s not a bad metaphor for the mummy himself. Though we rarely see his roaming, ravaged countenance these days, if we look he’s always right there in our pop culture’s peripheral vision, biding his time eternal and ready to pounce. Even today, that’s scary.