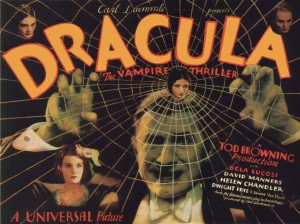 Although Dracula first came to life, if you’ll excuse the phrase, in Bram Stoker’s 1897 novel, it was through the 1931 Universal Studios film that he truly gained immortality. When watched now, it’s slightly difficult to see what it is that caused Dracula to become arguably one of the most important movies in history. It’s all a bit soapy and stagy—but with good reason. While the film was inspired by a classic piece of horror literature, it was actually based on a play.

Count Dracula has had a somewhat troubled history on film. He first appeared onscreen in 1922, but he went by the name Count Orlock. German director F. W. Murnau’s Nosferatu: A Symphony of Horror was an unauthorized adaptation of Stoker’s book that eventually was pulled from distribution due to legal action from Stoker’s estate. But when Universal production head Carl Laemmle Jr. decided to film the story, rather than adapt the novel outright, the filmmakers chose a popular stage production to serve as their source material.

Written by Hamilton Dean and revised for American audiences by John L. Balderston, the 1924 stage play Dracula differed greatly from Stoker’s book. Several changes were made to the plot and characters, but it seemed to please the crowds that flocked to see it. The production finally hopped the pond and made it to Broadway in 1927, and in doing so, the Universal film gained its most valuable asset: Béla Lugosi.

Lugosi was a Hungarian expatriate who’d come to America in 1920 to escape political turmoil during the Hungarian Revolution of 1919. A veteran actor in his native country, Lugosi landed in the U.S. speaking not a word of English but soon had roles on Broadway, where he learned his lines phonetically. He eventually made it out to Hollywood and appeared in several silent films. He also had a starring role in a scandalous affair with sexy “It Girl” Clara Bow, who broke up Lugosi’s marriage to a wealthy socialite. He was married four more times before his death, but women were not the worst of Lugosi’s habits. As a young soldier, Lugosi injured his back and this led to a morphine addiction that he never truly escaped. But none of this mattered in 1931, when Lugosi was forced to swallow his pride and lobby for the part he’d already been playing successfully onstage for years.

Universal’s first choice for the role of Dracula was Lon Chaney, “the Man of a Thousand Faces.” Chaney had been the studio’s go-to guy for horror in the silent days, but he’d left to work exclusively at MGM Studios in 1925. Dracula director Tod Browning (best known for 1932’s cult classic Freaks) was chosen for the flick due to his close friendship with Chaney. Browning had directed him in several films already, including a 1927 vampire flick called London After Midnight, which has been forever lost to history. Sadly, Chaney died in 1930 before production of Dracula commenced, and it remains unknown whether he actually would or could have agreed to play the part. Though unfortunate, his death did allow Lugosi to be cast, at an extremely low salary of $500 a week, in the film role that—for better or worse—came to forever define him. Though he only played Dracula one more time in his career, Lugosi was so associated with the Count that he found it difficult to break loose from the role and came to foster a type of resentment particular to actors—he didn’t want to play the part, but he didn’t want anyone else to either.

By now, we’re all familiar with the story, but let’s do a quick-ish recap. Universal’s version of Dracula opens with a young man named Renfield (Dwight Frye) traveling to Transylvania to close a real estate deal with Lugosi’s Count. Dracula is purchasing a rundown property called Carfax Abbey in England, where he plans to relocate. Before the night’s end, Renfield is rescued from Dracula’s trio of hungry brides only to become the Count’s helpless slave. The next day, Renfield and his new master take passage aboard a ship that arrives in England with all passengers dead—that is, all but Renfield, who appears hopelessly insane. While we know the reason for these mysterious deaths is Dracula, who is hidden in his coffin below deck, it is feared the cause might be an outbreak of plague. 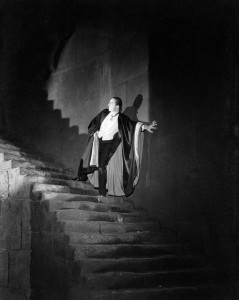 With Renfield ensconced in the asylum run by a Dr. Seward, conveniently located adjacent to Dracula’s new property, the Count goes about settling into his new (after)life and treating the city like his own personal tapas bar. Later, he meets Dr. Seward, his daughter Mina and her fiancé, John Harker, and best friend Lucy, who boldly expresses a romantic interest in the mysterious stranger. Lucy pays a stiff price for her ardor when the Count flies into her bedroom that night and takes her, then her life. Dracula is a bit of cad since he actually wants Mina for his unholy bride. Anyway, Dr. Seward calls in Professor Van Helsing, who quickly becomes intrigued by the whole mess and discovers the explanation for the sudden preponderance of bats, wolves and death.

Our undead lothario finally makes his way to Mina’s bedroom and you know what that means. Of course, Mina falls helplessly to the Count’s desire. Dracula ends up in the drawing room with Professor Van Helsing and, for the benefit of those who came in late, recites the customary villain’s exposition speech, dramatically outlining what he’s done and what he plans to do. A few reels later, Dracula is (truly) dead, Mina is (adequately) redeemed and all is (partially) right with the world—Dracula is the first horror flick to not provide a rational explanation for the horrors depicted. There’s no man behind the mask à la Scooby-Doo. The villain is a supernatural entity, plain and simple. In an age more innocent, viewers left the theater with the reinforced knowledge that Evil is real, a radical entertainment approach at the time but one that paid off. Dracula did boffo box office.

While it’s true there’s a lot of plot in Dracula, a true potboiler that’s as much melodrama as horror flick, that’s one of the interesting things about the film. It’s the product of an era of change and reflects the artistic climate of the times. Silent films were giving way to talkies, and Dracula obviously is a transitional film. The industry was still learning to tell stories in what was fundamentally a new narrative language, and though there is plenty of theatrical dialogue in Dracula, large sections of the flick are silent, employing striking imagery to tell the tale, with an obvious debt to German Expressionism (cinematographer Karl Fruend’s stunning work cannot be undervalued). This might have been the result of veteran silent director Tod Browing not being comfortable with the recent sweeping changes in filmmaking. Also, many of the performances are typical of those found in silent movies, full of big gestures and exaggerated expressions—especially those of Lugosi, who was translating his larger-than-life performance from stage to film, and Frye, whose portrayal of the lunatic Renfield set a new standard for onscreen madmen and was effective enough to be echoed a few years later by the hopheads in Reefer Madness. 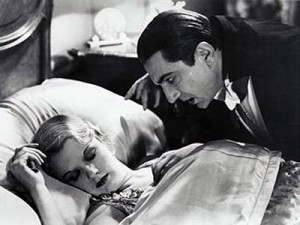 Lugosi’s Dracula is the beginning of the “vampire as seducer.” Prior to this, vampirism was associated with pestilence. While that connection is still present here, the Count’s dark sexuality is the, ahem, main thrust. Dracula is the despoiler of virgins, the reaper of innocence. Essentially, Dracula is a sexual cautionary tale. Women are made to pay for their desire, as illustrated by Lucy’s fate. And that link to plague is expanded to include the so-called “diseases of Venus.” This is made clear when, after being bitten, Mina informs John that he must never touch her or kiss her again, insinuating she is unclean.

Universal’s Dracula has been declared “culturally significant” by no less authority than the U.S. Library of Congress, who added it to the National Film Registry in 2000. But Dracula might well be one of the most influential films made for what it introduced into popular culture: the modern notion of vampire. Lugosi’s Count Dracula is still, almost 80 years later, one of most imitated film characters. His broad Hungarian accent—the nuance of which is often approximated, always exaggerated, but rarely duplicated—is accepted shorthand for Vampire. One need look no further than Sesame Street to see how far the shadow of Lugosi’s performance has fallen.

Dracula is not the best of the early fright films, or even the best of Universal’s (that would be Bride of Frankenstein), but it’s the flick that dragged horror into the modern age and gave us all a vampire for the ages. And though it has its faults, it’s full of fine filmmaking—the opening section in Transylvania is wonderful and the scene where Van Helsing discovers that Dracula is a vampire is handled quite cleverly.

In this era of quick cuts and instant gratification, contemporary viewers might have trouble sitting through this classic film. But those that are interested enough in the history of horror to do so—and you know who you are—will be amply rewarded. Much like the Count himself, Universal’s film will be around for a long time, and for good reason: Dracula is an eternally fascinating and durable anti-hero. To quote Professor Van Helsing, “We know why the wolves talk, do we not, Mr. Renfield?”