That’s the question asked over and over again in Basket Case, director Frank Henenlotter’s  horror cult classic. And, granted, it’s a fair question.  Actually, I’m still not sure of the answer.

Duane Bradley (Kevin Van Hentenryck) is a seemingly nice enough young man—he’s polite, soft spoken, with a bit of a lisp—and he never goes anywhere without his basket.  Now, Duane’s basket could contain anything: keepsakes, clothing, a picnic lunch…but no, it holds the remnants of Duane’s formerly conjoined twin brother, Belial, who resembles a “squashed octopus” with pointy teeth and talons.

Released in 1982, Basket Case has become somewhat notorious over the years for its gory violence and tastelessness (which aren’t necessarily the same thing, by the way).  Filmed in New York on an extremely low budget, with a very small crew, Basket Case is the story of Duane and Belial’s quest for revenge on the doctors that separated them years earlier.  Duane and Belial share a psychic bond and evenly divide the duties of their task, with Duane doing the detective work and Belial doing the dirty work.

After arriving in the big city and checking into the Hotel Broslin, a fleabag in Times Square (when it was still good and sleazy), Duane and his partner in crime waste no time.  All within a day, Duane tracks down one of the doctors, Belial kills the doctor, and Duane meets a girl.  These guys work fast!  While Duane should be trying to keep a low profile, everybody he meets can’t help but ask the same question: “What’s in the basket?” (For future reference, it’s hard to blend into the scenery when lugging around a big picnic basket everywhere you go.)  Eventually, Duane can keep his secret no longer and tells his tragic story to a neighbor at the hotel. 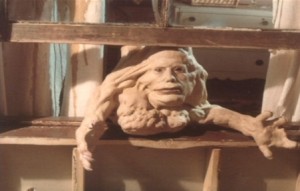 As children, Duane and Belial were quite happy as one, but their father insisted they be separated.  And though the operation was a success—with Duane being the surviving entity, as they say in business—Belial was not disposed of effectively. So, of course, Duane retrieved  Belial from the trash and stashed him in a basket.  Belial then wreaked vengeance of a biblical sort on their father, and the boys were raised by their amazingly sympathetic aunt, who sensed their secret but told no one.

As often happens in the movies, a woman enters the scene and things go bad. In this movie, the woman is Sharon (Terri Susan Smith), the receptionist of one their victims. And Duane fall hard. Really hard.  Though Belial feels threatened by Duane’s new girlfriend, he is also curious about the pleasures of the flesh.  This curiosity leads to the most controversial scene in Basket Case.  One night, while Duane is sleeping, Belial crawls to Sharon’s apartment and rapes and kills her. 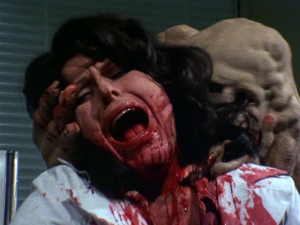 As you might expect, Duane and Belial’s tale spirals downward from there.  In print, the plot of Basket Case seems grim, but onscreen it manages to be fairly amusing in a dismal way.  While watching the movie, I got the feeling there was a subversive layer of symbolism at play. As I wondered earlier: what’s really in the basket?  Could it be Duane’s repressed homosexuality? You be the judge.

Although the low budget is apparent throughout the film, Belial is effectively rendered through fairly impressive stop-motion animation.  It’s a lot of fun to watch him skitter around as he carries out his dastardly deeds.  Henenlotter makes good use of his grubby urban locations, but most of the film’s performances are amateurish at best.  What can I say, when you watch a flick like this, you take the good with the bad.

Basket Case looks like what John Waters would have come up with if he’d made a horror film early in his career.  It lives up to its lurid reputation and is an entertaining way to spend ninety minutes, but be warned: it might not be your cup of tea.  In fact, it might go down better with a shot of bourbon.

This article was posted in Reviews and tagged Basket Case, cult classic, Frank Henenlotter, gory, horror, John Waters, lurid, notorious, Reviews, Slammed & Damned, Theron Neel, violence. Bookmark the permalink. Follow comments with the RSS feed for this post.Trackbacks are closed, but you can Post a Comment.