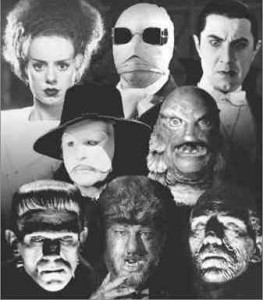 The days are growing shorter, there’s a chill in the air and the store shelves are filling with costumes and candy. This can mean only one thing: Halloween is near. This year, all the cool kids will be parading around in their Avatar, Iron Man 2 and Prince of Persia costumes, and that’s fine. To me, though, Halloween is—and always will be—all about monsters. It might seem old-fashioned, but I don’t think it gets any cooler than Dracula, Frankenstein and The Mummy. This group of ghouls is the font from which modern horror sprang. And the church that gave birth to this trinity of terror is, of course, the sacred Universal Studios.

To celebrate All Hallows Eve this year, Slammed & Damned is going back to basics to take a look at where it all began—the poor, misunderstood creatures of those wonderful Universal horror movies. I’m passing over the silent films for now and heading right to the talkies. I’m going to do them in chronological order, beginning with Tod Browning’s take on Dracula featuring Béla Lugosi. Then, we’ll move on to James Whale’s Frankenstein starring Boris Karloff. Finally, we’ll watch The Mummy, directed by Karl Freund and starring, again, Karloff. We’ll cover others after that, but this terrifically terrorific trio of flicks is a perfect starting place. These are the movies that made me a horror fan and, believe it or not, they’re responsible for your love of the genre too.

Yes, these might be (very) old films, shot in (gasp) black and white, but they are also smart, well-made films crammed full of dark humor, clever metaphors and unforgettable imagery (as evidenced by the very hip video embedded below). Check back in a couple of days, when we’ll look at Lugosi’s career-defining turn as the eternally charming—and just, well, eternal—Count Dracula.