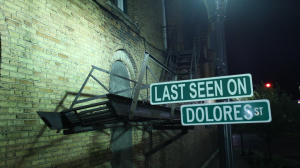 Telling a story on film can be a perplexing process. Some directors require a series of two-hour movies, and several hundred million dollars, to tell just one tale and they still make a mess of it. But some directors can get it exactly right in only a few minutes, for a couple of thousand bucks. I was reminded of this recently when I watched Devi Snively’s latest short film, Last Seen on Dolores Street, in which she creates a whole world, juggles a host of tones and colors, and even manages a surprise or two along the way—all in less than four minutes. In your face, George Lucas. 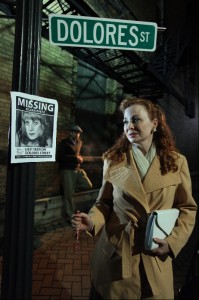 Snively’s career has been all about exploration and development. Beginning with a series of short films that allowed her to discover and perfect her directorial style, Snively seemingly reached her zenith with the masterful Death in Charge, which condensed all her favorite themes into a deeply affecting 15 minutes. Then she took a turn and made trippin’, a feature-length flick completely different from anything she’d done before. Now she’s back with Last Seen on Dolores Street, and the result is an experiment in mood that’s, again, unlike any of her previous work. Of course, it makes sense that Snively would stretch creatively and try something new. She seems to thrive on challenging herself.

Last Seen on Dolores Street is a clever little piece of horror noir, full of dark shadows and sinister motives. Danger lurks around every corner and no one is what they seem. With the aid of John Klein’s cinematography, Kunal Rajan’s sound design and Cliff Shoults’ score, Snively deftly creates an Otherverse where anything can happen, then leaves us with an ending that hearkens back to either O. Henry or EC Comics, depending on your specific literary sensibilities. She’s learned the secret of an effective short film: get in, make your point, and get out.

Snively is not a showy filmmaker, but a concise fabulist. Employing only three actors (Cynthia Dane, Circus-Szalewski and Ken Dusek, Jr.) and one line of dialogue, she’s telling a small story, broken down into moments and illustrated with well-conceived, flawlessly realized shots. This is material that could come off as one-note in lesser hands, but Snively develops it into a fully orchestrated chamber piece, composed of nuance and atmosphere.

It’s a shame that short films rarely have a life beyond the festival circuit, because all of Snively’s work—and Last Seen on Dolores Street in particular—rewards repeated viewing. When watched again, these little gems provide numerous “aha!” moments that allow insight into what initially seemed a single-faceted idea. Maybe someday we’ll get a Short Films of Devi Snively collection, but until then, look for them at a film fest near you.

Not every story requires 90 minutes to be told effectively. In fact, certain filmmakers can work wonders in less than half that time. Take a stroll down Dolores Street to see how it’s done, but keep a watchful eye. With Devi Snively as your guide, you never know where you’ll end up, or who—or what—you might meet.