There’s Nothing Out There Is Here—Again! 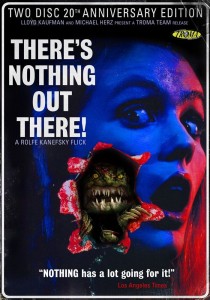 Here’s some good news for you horror fans out there. I recently received an exciting update from the talented and busy Rolfe Kanefsky, director of such cool horror flicks as The Hazing and Nightmare Man. It’s been 20 years since the release of There’s Nothing Out There, his first foray into film. To celebrate this momentous occasion, Kanefsky has teamed with the twisted folks at Troma to issue a special two-disc 20th anniversary edition of There’s Nothing Out There, in stores tomorrow, just in time for all your Halloween viewing needs.

I know what you’re thinking: What’s so special about this special edition? That’s a fair question. Troma and Kanefsky have collaborated to produce an amazing package, stuffed with extras. Of course, you get a nice clean print of the movie, as well as a new director’s commentary and a behind-the-scenes featurette. You also get a new introduction from both Kanefsky and Troma founder and noted crazy man Lloyd Kaufman. There are deleted scenes as well as production stills, original cast auditions, storyboards, pre-production footage, test footage, the original theatrical trailer and even a deconstruction of the flick from the director himself. Now what would you pay? But wait—there’s more! 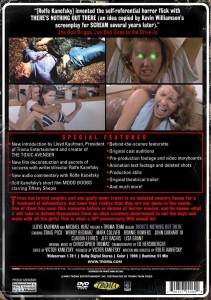 If you pick up this new super-deluxe package, you’ll also receive two whole other films as well. First, you’ll get Just Listen, a short film that Kanefsky shot in college which is also part of a scene in There’s Nothing Out There. And, perhaps most exciting is the inclusion of Mood Boobs, the short starring Tiffany Shepis. Kanefsky mentioned this flick in part four of our extended interview and, lemme tell you, I get more questions about this film that any other movie I’ve covered. Mood Boobs has been out of print for years and I know there will be some very happy film fans out there once it’s reissued.

Kanefsky has been hustling all summer long, shooting and planning new projects. It’s unbelieveable how many irons this guy has in the fire. Hopefully, I’ll have more news soon about his latest exploits. But if you’re in the Los Angeles area over the next couple of weeks, you can check in with him in person. On October 9, Kanfesky will be part of a horror screenwriters panel, titled “Writing for the World of Horror,” at Universal Studios Backlot at 1:00 p.m. Joining him will be up-and-coming filmmaker Athony C. Ferrante and the legendary Kevin S. Tenney. Also, Kanefsky will be doing a signing for the new DVD at Dark Delicacies in Burbank at 7:00 p.m. on October 19. Stop by, pick up an autographed copy and say hi.

This article was posted in Other Awesome Stuff and tagged Anthony C. Ferrante, Dark Delicacies, Halloween, horror, Kevin S. Tenney, Lloyd Kaufman, Mood Boobs, Nightmare Man, Other Awesome Stuff, Rolfe Kanefsky, Scream, The Hazing, There's Nothing Out There, Tiffany Shepis, Troma. Bookmark the permalink. Follow comments with the RSS feed for this post.Trackbacks are closed, but you can Post a Comment.