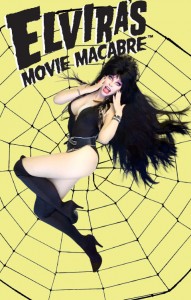 Yes, tonight is the night you’ve been waiting for. After way too many years and even more tears, Movie Macabre returns, featuring that ghoul who makes ya drool, the hot horror honey who’s in it for the money, the hostess with the mostest…talent on TV. That’s right, I can only be referring to the one, the only—Elvira, Mistress of the Dark.

I’m sure you remember my recent article on Elvira’s return. Well, I’m here to present some more news you can use. When I last wrote, the stations broadcasting Elvira’s triumphant return had not been nailed down. I’m happy to report that all that technical mumbo-jumbo has finally been worked out. Click HERE for a complete listing of the channels and broadcast times for Elvira’s Movie Macabre 2.0. Tonight, Elvira’s macabre movie “classic” will be Night of the Living Dead, George A. Romero’s seminal 1968 zombie flick/political screed. This a spiffy way to kick off, so please check the schedule to ensure you don’t miss it.

And to get you in the mood, I’m embedding a couple of clips of Elvira doing what she does best. These snippets, from the mid-1990s Rhino Home Video series Elvira’s Midnight Madness, are the intro and outro to the campy, weird-ass 1962 rock and roll caveman musical Eegah, featuring Richard Kiel, Marilyn Manning and legend-in-his-own-mind Arch Hall Jr. If Elvira has anything close to this crazy planned for her new show, I predict a smashing success. She might even win some Golden Globes—now, now. Be nice.

This article was posted in Other Awesome Stuff and tagged Arch Hall Jr., Eegah, Elvira, Elvira Mistress of the Dark, Elvira's Midnight Madness, George A. Romero, Marilyn Manning, Night of the Living Dead, Other Awesome Stuff, Rhino Home Video, Richard Kiel, Slammed & Damned, Theron Neel. Bookmark the permalink. Follow comments with the RSS feed for this post.Trackbacks are closed, but you can Post a Comment.