Under the Raven’s Wing 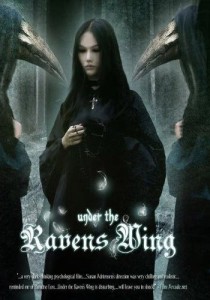 There has recently been an explosion of female-driven independent horror films. In what historically is a male-dominated genre, women are really stepping up to the plate. And with Under the Raven’s Wing, writer/director Susan Adriensen has hit a good, solid triple.

The examination of a group of young women and the crime they committed, Under the Raven’s Wing is not a traditional horror flick. It’s more a psychological drama/character study. The film is told in the form of a documentary, a narrative device it shares with The Blair Witch Project. I bet these two films will draw comparisons, but trust me, they couldn’t be more different.

Under the Raven’s Wing is the story of Raven (Kimberly Amato), Angel (Kamilla Sofie Sadekova) and Jessie (Jessica Palette) and the filmmaker that becomes involved with them. The girls share a cult-like belief system that includes different dimensions and, apparently, murder, which they refer to as “transcendence.” Raven is the leader of the pack—sort of the ultimate mean girl. She knows how to get what she wants and uses any means necessary.

As the tale unfolds through snippets of film, we slowly learn more about the story. It seems the girls have murdered a man and want to share their crime with the world. Raven has persuaded a young director (Coy DeLuca) to document their philosophy of transcendence for all to see, though it’s obvious that the filmmaker has much more than movies on his mind. The further he gets sucked in, the more horrified he is by what he learns and the harder it is for him to get out.

Adriensen’s script is quite smart and subtle. She assumes her audience is intelligent, which is nice change from most of the films out there these days. She doesn’t feel the need to hit you over the head or spell things out. There’s also a sly sense of humor on display. Adriensen has also done some impressive technical work here. The film uses several different film styles to convey the story. Though it was all shot with one camera, the movie is constantly changing looks and techniques. The sound and lighting are uniformly excellent, and the performances are wonderful throughout. 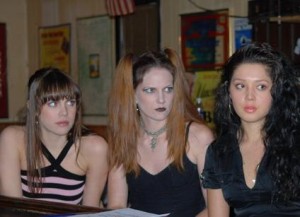 As Raven, Kimberly Amato gives an incredibly nuanced performance. At times seductive, stupid and sadistic, Amato is a lot of fun to watch as she blusters her way through what is basically a psychological study in group dynamics. Raven definitely has her hands full with Angel and Jessie.

Kamilla Sofie Sadekova’s Angel is the ultimate woman-child—confused, sexy and rebellious. Sadekova is very good at expressing Angel’s turbulent, flirty personality. And though she may have the fewest lines, Jessica Palette might be the most intriguing actor here. The camera absolutely loves her. Her eyes are extremely expressive, saying volumes with a single glance. Jessie is a little girl lost, and Palette makes you want to rescue her at every turn.

Under the Raven’s Wing is a striking film that fascinates as it entertains. Susan Adriensen has proven that she can play in the big leagues. Next time up, I bet she steals home.

This article was posted in Reviews and tagged female, film, horror, independent, Jessica Palette, Kimberly Amato, murder, psychological drama, Raven, Reviews, Slammed & Damned, Susan Adriensen, The Blair Witch Project, Theron Neel, transcendence, Under the Raven's Wing. Bookmark the permalink. Follow comments with the RSS feed for this post.Trackbacks are closed, but you can Post a Comment.