And There was Much Rejoicing—The return of Elvira

As you probably know by now, campy horror hostess Elvira—yes, that lassie with the classy chassis—is returning to television on a regular basis. While she’s become a ubiquitous brand over the past couple of decades, Elvira hasn’t had a TV show since the mid-1980s. But on September 25, Elvira, Mistress of the Dark (and queen of the double entendre) finally returns to the airwaves with a slate of 26 brand new episodes of Elvira’s Movie Macabre.

Portrayed by actress Cassandra Peterson, Elvira was born in 1981 when Peterson was hired to host a weekend horror movie program at a local Los Angeles television station. Peterson conceived Elvira as a sexy combination of burlesque comedian and valley girl (think: Sophie Tucker meets Clueless). Her show, Movie Macabre, featured schlocky B movies that she would mock mercilessly throughout the program, much in the way MST3K later did—but, you know, with cleavage instead of robots. Peterson’s sassy sense of humor ranged from painfully corny to meta clever and helped make Movie Macabre a big hit.  In fact, Elvira even went on to make TV history by becoming the first horror hostess to become syndicated nationally. 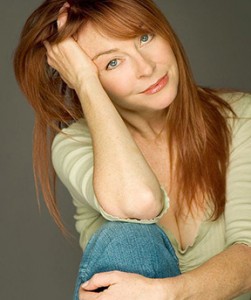 After Movie Macabre ceased production, Elvira starred in two hilarious, yet little seen, feature films—Elvira, Mistress of the Dark (1988) and Elvira’s Haunted Hills (2001)—and appeared on several TV shows. Peterson also released a series of official Elvira Halloween music CDs through Rhino Records and began issuing some of the old episodes of Movie Macabre on DVD through Shout! Factory. Of course, there’re also the Halloween costumes, pinball and slot machines, comic books, T-shirts and various and sundry accessories. Elvira has been very good to Peterson through the years. And, with Elvira’s overdue return, Peterson is being very good to us.

For better or worse, Peterson is tweaking the Movie Macabre formula a bit in order to appeal to a new generation of viewers. I suppose that means jokes about social networking and cell phones. Jack White has even written a new theme song for an updated opening sequence by noted artist and filmmaker Gris Grimly. As far as I can tell, there’s been no word on whether John Paragon, Peterson’s long-time collaborator, will be involved. He’s been Peterson’s writing partner for more than 20 years and also appeared as The Breather, a recurring character on the original iteration of Movie Macabre. I can’t imagine anything involving Elvira where he wasn’t involved, so keep your fingers crossed. 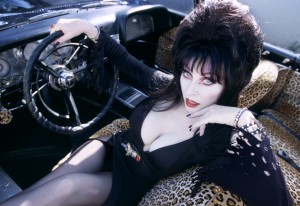 Now, the only issue left to discuss is when and where we can find this new Movie Macabre. The show will be syndicated, which means it will likely run at different times in the various markets in which it’s shown. So far, announced stations include KDOC in Los Angeles, WCIU in Chicago, WATL/WXIA in Atlanta and WBGN in Pittsburgh. It will also be running on digital cable network THIS! Television, though I can’t find any mention of it on the network’s website.

I can’t wait to see what new gags Peterson has cooked up for Elvira. Her tentative list of movies looks pretty solid and includes “classics” such as Lady Frankenstein, The Manster, The Wild Women of Wongo, I Eat Your Skin, The Terror and Attack of the Giant Leeches. Based on these, it appears Peterson should have plenty of material to work with.

Personally, I don’t know why Elvira hasn’t ventured back to weekly TV before now, but I do believe she chose the exact right time to return. I mean, think about how, ahem, striking she was back in the ‘80s. Now, picture her big talent on your nice, modern big-screen TV. Need I say more?

This article was posted in Other Awesome Stuff and tagged '80s, Attack of the Giant Leeches, campy, Cassandra Peterson, double entendre, Elvira, Elvira Mistress of the Dark, Elvira's Haunted Hills, Halloween, horror, I Eat Your Skin, John Paragon, Lady Frankenstein, Movie Macabre, MST3K, Other Awesome Stuff, Rhino Records, Shout! Factory, Slammed & Damned, The Manster, The Terror, The Wild Women of Wongo, Theron Neel, THIS! Television. Bookmark the permalink. Follow comments with the RSS feed for this post.Trackbacks are closed, but you can Post a Comment.