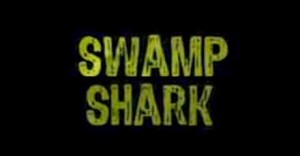 “For 200 million years, alligators have ruled the swamp. Next summer, the gators have company.” I know what you’re thinking, but you’re wrong. That portentous opening quote is not Shakespeare. It’s taken from the trailer of Swamp Shark, the latest craptacular original movie from the fine folks at Syfy.

Don’t get me wrong; I love this stuff. I mean, Sharktopus, Mega Piranha, Dinocroc, Supergator, Dinocroc Vs. Supergator—I swear, you cannot make this stuff up…umm, well, I suppose you can. At least, Syfy can. Sure, they’re not great films, but they definitely have their charms. And Swamp Shark looks like it will carry on the tradition of B-movie awesomeness.

Featuring Kristy Swanson, D.B. Sweeney and—in what is some of the most splendid miscasting in recent memory—Robert Davi, Swamp Shark is set in Louisiana’s lush Atchafalaya Basin where the annual Gator Fest will soon be held. When a local (and no doubt colorful) drunkard is chewed up and spat out by something big, amphibious and toothy, the seemingly crooked sheriff (Davi) blames a hungry gator—but the spunky Rachel (Swanson) knows different. With the help of the mysterious Charlie (Sweeney), she makes plans to save the day, most likely using her wits and several large firearms.

A few thoughts: (a) I’ve loved Kristy Swanson ever since she teamed with Donald Sutherland to kill vampires in the original incarnation of Buffy the Vampire Slayer. She looks mighty persuasive toting around a high-powered rifle in the Swamp Shark trailer, so let’s hope this flick provides a chance to rejuvenate her career à la Kyra Sedgwick. Maybe Swanson could get a Syfy series out of the deal. (b) Does anyone else confuse D.B. Sweeney for C. Thomas Howell? Let’s hope this flick provides me the chance to get these two ‘80s actors straight once and for all. (c) Robert Davi as a Louisiana sheriff! Yikes. Just seeing Davi sitting in a pickup, sporting a Stetson and a questionable Southern accent has me more excited than I should be. I’ll work on this. (d) A quick glance at the cast list for Swamp Shark turns up the name Sophie Sinise—yes, daughter of Gary Sinise, the serious actor currently slumming on TV’s CSI: NY. I wonder how he feels about his daughter appearing in this nature-runs-amok muck. Oh well, I’m sure he feels better than Laurence Fishburne does about his daughter’s recent foray into film. 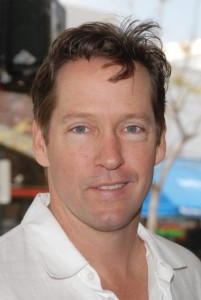 So, how does Syfy do it? How do they continually churn out these resplendently cheesy, yet marvelously vulgar flicks? The secret behind these Syfy original movies is this: They aren’t made by Syfy. They’re actually made by independent production companies that specialize in turning out low-budget movies and knockoffs of box office successes. And for Swamp Shark, we can thank Active Entertainment and its subsidiary Bullet Films, both of which are located in Louisiana—which makes perfect sense considering Swamp Shark is essentially Jaws Goes Cajun.

What I really want to know is, how do they keep coming up with these rad titles? C’mon, Android Apocalypse, Flu Bird Horror, Mega Snake, Mongolian Death Worm, Shark in Venice—there must be some SEO-like program that generates these things, right?

I don’t know exactly when Swamp Shark will air, but any movie that’s a mash-up of Jaws, Anaconda and Pirhana can’t be released too soon for me. For added value, I’m embedding another video (illustrated with World of Warcraft animation—you know, for kids) about an infamous Louisiana legend: the incomparable Jerry Reed’s Amos Moses. Now there’s a character that should be the subject of a movie. A sheriff-killing professional alligator hunter who as a child was used as gator bait by his father? Zounds! It practically writes itself. Oh, Active Entertainment…are you listening?