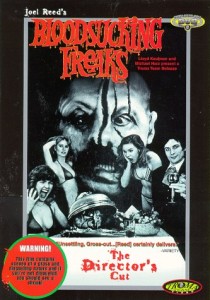 I’m willing to bet most people had never heard the term “grindhouse” until not long ago, let alone seen a true grindhouse film.  But thanks to the recent efforts of a pair of quite popular film directors, it’s now hard to go more than a couple of days without hearing some hipster drop the phrase in an attempt to be cool.  With the rise of the DVD, it has become fairly easy to track down and view many exploitation movies of the grindhouse era, which lasted roughly from the late ‘60s to the late ‘70s.  These films consisted of almost every genre you can think of: martial arts epics, softcore porn movies, blaxploitation films, splatter/slasher flicks, etc.  If there’s any one movie that perfectly epitomizes all that is grindhouse, it just might be Bloodsucking Freaks, Joel M. Reed’s 1976 underground cult classic.

Part gore flick, part dark comedy, part satire, and totally ridiculous, Bloodsucking Freaks is the tale of goofball playhouse owner/sadomasochist Master Sardu (Seamus O’Brien) and his attempts to mount a production that will both validate his evil genius and be critically acclaimed.  As we all know, this is never an easy balance to achieve. Sardu’s shows are in the grotesque tradition of the French Grand Guignol, full of torture and murder. But what the audiences don’t realize is that the torture and murder are real.  Sardu is aided in his work by an obnoxious, overeager midget named Ralphus (Luis De Jesus), who is a bit of a Renaissance man, I must say.  Not only does Ralphus do all of Sardu’s grunt work, he’s also a dancer, master of ceremonies, chef, comedian, musician, actor and master of the blow gun. 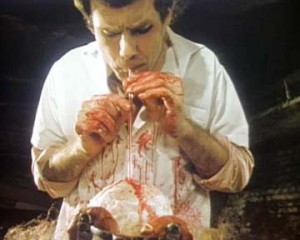 I could spell out the plot, but all you really need to know is there’s plenty of nudity, obviously fake blood, terrible acting and ‘70s clothes and hairstyles.  Oh, there’s also a cage of naked women, human dart boards, cannibalism and a scene where a guy drills a hole in a woman’s skull and sucks out her blood and brains. 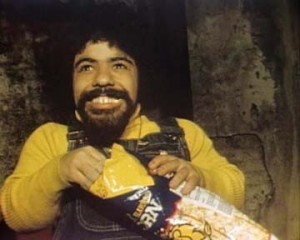 Bloodsucking Freaks (originally titled The Incredible Torture Show) is a mixture of Theater of Blood, the Vincent Price classic, and H. G. Lewis’ proto-gore flick Blood Feast and is a link in the chain that has led us to flicks such as Saw and Hostel.  Granted, it’s not a great movie, but it’s worth seeing once if for no other reason than its historical value, not to mention the chance to see a midget with an afro get a blow job from a dismembered head.  I know what you’re thinking: they just don’t make ‘em like they used to. But you know what?  Maybe that’s a good thing.