Now Playing at the House of Grind—Machete 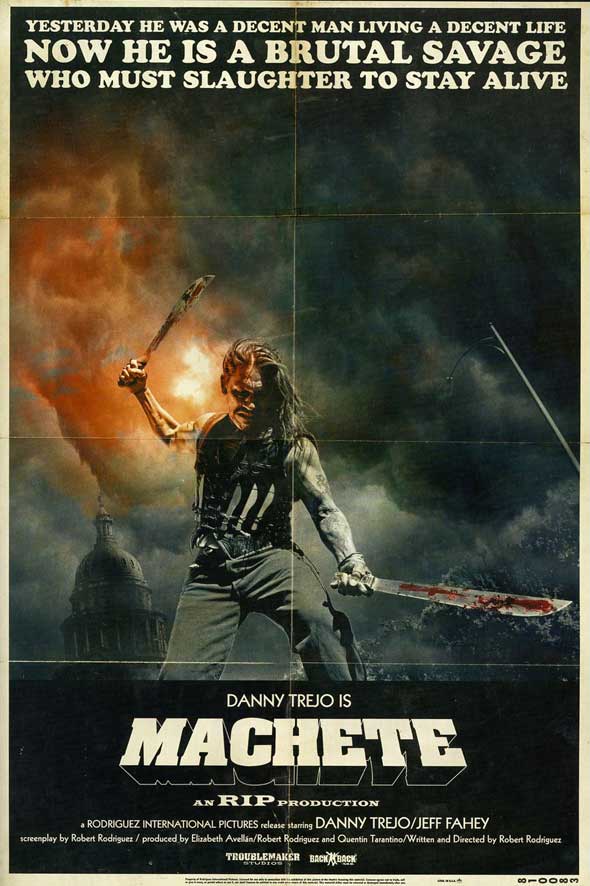 The legend of Machete looms large. Though he’s just a man, he’s many things to many people: devil, angel, lover, fighter, avenger, savior to the downtrodden. As dangerous with a weed whacker as with the weapon for which he is named, the former Mexican federale called Machete (Danny Trejo) has come to the U.S. illegally after he was betrayed and his family was murdered by evil drug lord Torrez (Steven Seagal). He has eked out a living as a day laborer until being set up as a fall guy by Booth (Jeff Fahey), the unctuous henchman of Senator John McLaughlin (Robert De Niro), a homicidal political opportunist trying to erect a fence along the Texas border to keep out illegal immigrants.

That is a brief outline of only part of the plot of Robert Rodriguez’s kickass, though slightly overstuffed  new film, Machete. Co-directed by Rodriguez and Ethan Maniquis, and written by Rodriguez and Álvaro Rodriguez, Machete is based on the fake trailer included as part of Grindhouse, the 2007 double-feature extravaganza made by Rodriguez and Quentin Tarantino.

To succeed in fulfilling the promise of the source material, all Rodriguez had to do was give us a fun, exploitative romp, and this he does in spades. But Machete has more on its mind that blood, boobs and bullets. Rodriguez has taken this opportunity to weigh in on the issue of illegal immigration. Don’t worry; he never makes his point at the expense of our enjoyment. Actually, Rodriguez knows just how to make this controversial topic entertaining. When Machete joins forces with sexy underground revolutionary Luz (Michelle Rodriguez) and her network of freedom fighters to take down a murderous militia patrolling the Texas-Mexico border, it’s clear where the filmmakers’ sympathies lie. But when we see Machete leading a parade of lowriders bouncing off to battle, it’s obvious Rodriguez hasn’t lost his sense of humor about the matter. 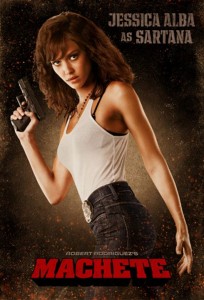 Rodriguez has a blast paying homage to the grindhouse flicks that inspired him, and he does so with wit and affection. All the hallmarks of ‘70s exploitation cinema are here: the fast zooms, the expository dialogue, the funky sex music. Machete also proves Rodriguez hasn’t lost his gonzo touch. There are several exciting set pieces, each more over-the-top than the previous, and plenty of amusing throwaway gags that’ll keep you smiling as the arteries spurt and body parts fly. In fact, there’s so much going on, the flick occasionally feels like it might run off the rails. But Rodriguez’s sure grip manages to prevent that from happening.

Machete’s cast seems to understand what their boss needs to make this movie succeed. All the usual suspects are here—Cheech Marin, Jeff Fahey, Electra and Elise Avellan (who played the “Crazy Babysitter Twins” in Planet Terror), Tom Savini, and, of course, Danny Trejo have all done good work for Rodriguez in the past, but there are some new players along for the ride. Don Johnson, Steven Seagal and Robert De Niro have now signed onto Team Troublemaker and these vets prove their worth with some nice character work. It’s especially cool to see De Niro having some fun. And Fahey, as Booth, is at the top of his game. He knows how to overact with finesse, if such a thing is possible. 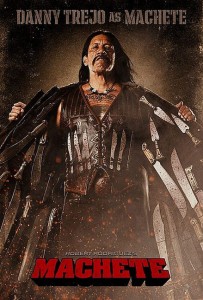 Rodriguez’s films always feature strong women, and here his ace in the hole is Michelle Rodriguez, who is wonderful as Luz. He’s also to be commended for pulling a good performance from Alba. One of the most beautiful women around, Alba is not exactly a consistent actress. Her performance in Sin City was one of the weakest in that film. But here, as Sartana, an Immigration and Customs Enforcement agent with a conscience—and Machete’s main squeeze—Alba does some of her best work. But, man, it wouldn’t hurt her to put on a few pounds. Not to get all Us Weekly, but I was shocked by how thin she is.

Rodriguez is well known as a one-man movie studio, writing, scoring, directing, shooting and editing all his films. But as talented as he is, every other Rodriguez flick is less than stellar (which doesn’t bode well for Spy Kids 4, his upcoming film). So, after Shorts, his somewhat irksome last film, Rodriguez was due for a success, artistically anyway. And with the help of a talented cast and crew, he’s achieved it. Maybe it has something to do with the fact that he lightened his load this time, sharing the writing and directing chores, as well as allowing others to shoot and edit. Whatever the reason, Machete is a nice reminder of what an imaginative and impressive filmmaker Rodriguez can be. For now, his legend remains intact, as does that of the man they call…Machete.